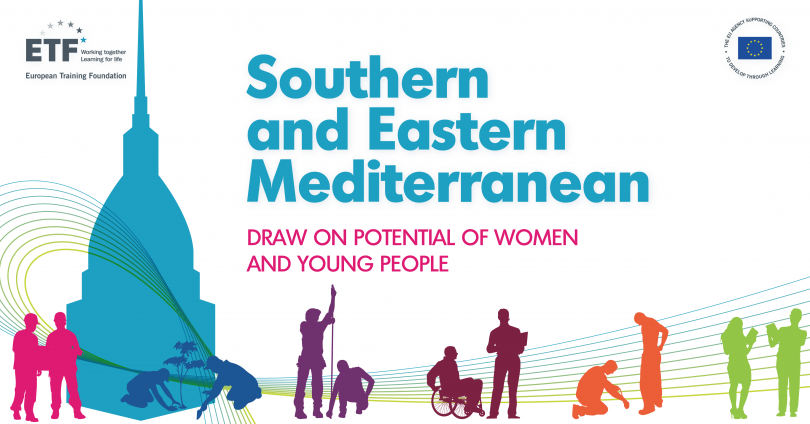 More should be made of the huge socio-economic potential of young people and women in the Southern and Eastern Mediterranean (SEMED) region, a European Training Foundation (ETF) event heard on 13 July 2021.

In his opening remarks to the ‘Torino Process 2018–20 online workshop: Torino Process in the Southern and Eastern Mediterranean region – key findings and the way ahead’, Lluís Prats, Head of the International Affairs Unit at the European Commission’s DG Employment, Social Affairs and Inclusion, said the EU’s wish to ‘contribute to a long-term vision of stability and an economy that works for all the people’ of the SEMED region was based on ‘common values putting people, particularly young people and women, at the centre’ of policies designed to support education and training and human capital development to improve the labour market.

The Torino Process – the ETF’s flagship, evidence-based process for supporting skills and human capital development policy reform and development in partner countries – encapsulated a ‘modern participative process that can bring about real change,’ he added.

The EU had identified priorities for the region that, with the support of the ETF, it was pursuing via the Torino Process: human capital development, good governance, the rule of law, resilience and prosperity, and the green transition.

Creating ‘perspectives for young people, preventing a brain drain, and supporting a transition from the informal to the formal economy’ were key objectives for people in the labour market in the region, which includes Algeria, Egypt, Israel, Jordan, Lebanon, Libya, Morocco, Palestine[1] and Tunisia.

Abdelaziz Jaouani, Senior Human Capital Development Expert at the ETF took forward his remarks in a presentation on the key findings of the report on the latest round of the Torino Process in the SEMED region.

Although all countries were exposed to global trends – the digital and green transitions – the biggest factor impacting socio-economic development was the under-utilisation of the vast potential of young people and women. In a region where half the population is under 24 and a third under 15, the ‘high young population should be an asset’, Jaouani said. ‘But for now it is a challenge, due to high pressure on the labour market.’

Most countries in the region (apart from Israel) were experiencing a brain drain as those with higher qualifications had lower chances of finding work, there was an influx of refugees and foreign workers, low job creation, low skills and high rates of micro and small enterprises – more than 95% of companies have five or fewer employees.

As many as two-thirds of the working-age population across the region are not involved in the labour market and a third of young people are neither in employment, education or training.

‘Under-utilisation hampers growth and job creation,’ Jaouani noted. ‘The large social exclusion and gender gap represents a substantial economic loss; the pandemic has worsened the intensity of this, but the lack of preparedness to anticipate and address future skills demands was there before the pandemic and is not a result of it.’

Better collection and analysis of data and a greater focus on involving the private sector in partnerships to address the challenges to better use of human capital, together with a greater emphasis on lifelong learning was needed, he said, pointing to figures that showed that continuing training in the SEMED region was under-developed, with Israel at 8.5%; Tunisia at 2.5%; and others at 1% or lower. In the EU, the figure is 37% for those aged 25–64 who benefit from adult learning, and there is a target to increase that to 60% by 2030.

[1] This designation shall not be construed as recognition of a State of Palestine and is without prejudice to the individual position of the Member States on this issue.