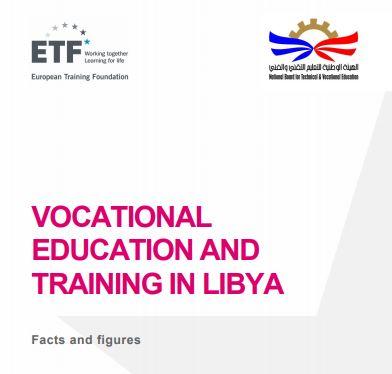 Libya: the challenges for VET

A series of workshops with various Libyan institutions, led by the ETF and backed by the Libyan Ministry of Education in 2018, to discuss the state of the vocational education and training (VET) system has contributed to a detailed report. The situation on the ground is captured along with the challenges being faced by the VET system within the fragile political context. The report has just been updated in 2020 as part of the ETF Torino Process  with additional information on the organisations and donors working on VET in Libya.

Inconsistencies in the governance and responsibilities for VET need to be addressed. This is also due in part to the split responsibility for VET.  The Ministry of Education is responsible for putting in place initial training and supervises technical and vocational education institutions, and the Ministry of Labour and Rehabilitation supervises continuing training.

Governance issues exacerbate problems such as a shortage of instructors and trainers in Libya and obsolete teaching methods which mean students gain limited exposure to practice and face substandard learning environments.

Partnerships need to be developed between the public and the private sector to contribute to the overall enhancement of VET and the local economy. Libya’s challenge and opportunity lies in being able to diversify and grow its untapped private sector, such as the agro-food industry, or, when the conflict ceases, tourism.

Libya must match the skills needed for its labour market but the ongoing conflict has led to an economic downturn making it difficult for the government to make comprehensive reforms. The Libyan economy still depends on oil, and now gas, as its main sources of revenue.

In support of reform, six organisations and donors are currently operating in Libya. Its Technical and Vocational Board recently held meetings with the British Council which is overseeing the implementation of an “EU-Libya TVET delivery and development project”.

State education (including VET) is free in Libya. The government actively supports VET, students don't have to pay for their textbooks and can use workshops, laboratories, machinery, and raw materials for free.

In 2011, following an uprising that took root in the Arab Spring, the Libyan leader Muammar Gaddafi was toppled, after nearly 42 years in power. Since then, the years have been defined by violence, war, and migration in a country that has relied solely on oil as a source of income, and with most of its population employed in the public sector.

Before 2011, Libya’s labour force - out of a population of six million people - included 2.6 million workers, but close to 50% of them were foreign. During the uprising, one million of these workers left the country. According to statistics from 2012, Libya’s current labour force is around 1.9 million. The majority are still active in the public sector, while workers in the oil sector and in agriculture represent up to 10% of the labour force.