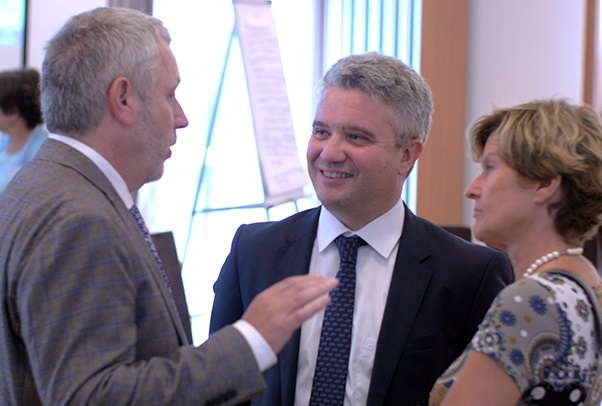 Apprenticeships in focus: How EU candidate countries in south-eastern Europe are addressing the challenge of developing work-based learning

Improving and developing work-based learning and apprenticeships were put under the spotlight in Tirana, Albania today (Monday, 24 September) at an international conference jointly organised by the European Commission and the European Training Foundation with the collaboration of Albanian Ministry of Finance and Economy.

The two-day conference - which includes delegate visits to three vocational schools in Albania - is the third regional seminar of the European Alliance for Apprenticeships (EAfA)for EU candidate countries. It aims to support and encourage vocational training stakeholders to improve apprenticeships and work-based learning programmes as a key plank of skills training policy and provision.

Opening the conference, Dajna Sorensen, deputy minister at Albania's Ministry of Finance and Economy, said her country was now seeing the results of "two decades of working on the biggest challenge - the weak links between vocational training providers and the private sector."

Major reforms in education and training in Albania led to the adoption in 2014 of a National Employment and Skills Strategy, which was the main policy document guiding the development of the country's VET system.

"Ultimately the objective is to ensure a relevant and quality VET system," the deputy minister said. "We want to motivate the private sector to become close partners with vocational training providers - this is a central goal of the reforms."

Cesare Onestini, the ETF's director, noted that the conference demonstrated an "increased interest" in work-based learning across EU member states and candidate countries.

"All five candidate countries have chosen work-based learning as a mid term deliverable," he said, referring to the 2015 Riga Declaration on mid-term aims for the development of education and training across the EU until 2020.

The Riga Declaration emphasises the importance of apprenticeships in preparing young people for the labour market, stating that work-based learning should be promoted "in all its forms, with special attention to apprenticeships, by involving social partners, companies, chambers and VET providers, as well as by stimulating innovation and entrepreneurship."

The ETF was, Mr Onestini added, "fully committed to continue supporting EAfA networking in the candidate countries - there are already plans for future seminars."

Olga-Luisa Anghelakis, of the EU Delegation, Albania, noted that "networking and exchange of best practices between member and candidate countries" was an example of what the EU could build and foster. The EU had allocated more than €50 million to the Albanian skills and training sector over the past decade, she added.

Ines Mucostepa, Secretary General of Albania's Union of Chambers of Commerce and Industry said that 36% of Albanian companies say they face difficulties recruiting because "the workforce does not have the required skills."

These realities are reflected in the government's focus on putting vocational education and training at the top of national education priorities, with a target of ensuring a quarter of all students are enrolled in VET by 2020.

The European Alliance for Apprenticeships (EAfA) is a unique platform which brings together governments with other key stakeholders, like businesses, social partners, chambers, vocational education and training (VET) providers, regions, youth representatives or think tanks.