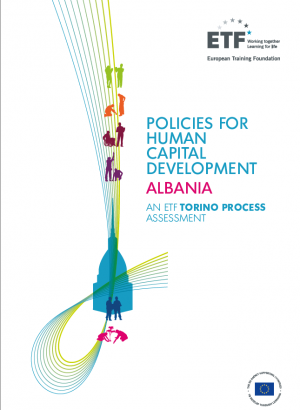 Albania applied for EU membership in 2009, and has been an EU candidate country since June 2014. In its Economic Reform Programme 2019–2021, the Albanian Government identified the mismatch between the skills people possess and those needed in the workplace as one of its main priorities. The government has stated that greater efforts are required in terms of investing in the skills and professional qualifications which would help to increase employment opportunities.

The responsibility for education is split between the Ministry of Education, Sports and Youth (MoESY), which is in charge of pre-school, general and higher education, and the Ministry of Finance and Economy (MoFE), which has taken over the running of publicly sponsored vocational education and training (VET). Staff shortages in the VET and employment departments of the latter ministry limit its capacities to effectively monitor and steer the system. To remedy this, it is planned to turn the National Employment Service into a National Agency for Employment and Skills, which will take over the management of all public VET institutions.

Albania is an upper-middle income country with a population of around 2.8 million. The population is rapidly ageing, mainly as a result of migration and decreasing birth rates. Economic growth (4.2% in 2018) is driven by the services sector, which is also the biggest contributor to employment in the country. The agricultural sector still contributes around one-fifth of the country's GDP and generates around 40% of the population's employment. The Albanian economy is dominated by micro and small enterprises (97.5%).

The number of people in vulnerable and precarious employment – for example, those without access to full employment rights, including contributing family members, wage employees without social security schemes, home and casual workers – is very high and remains a major structural weakness of the Albanian labour market.

Further, the share of the active population with a low level of educational attainment remains large. High rates of early school leaving have contributed to this phenomenon, and while early school leaving rates have fallen considerably in recent years, the percentage is still almost double the EU 2020 benchmark.

Vocational education and training could potentially contribute to improving educational attainment. Only around one-fifth of young people and very few young women enter upper secondary vocational education. Vocational Training Centres offer a limited choice of short-term vocational training courses (with few programmes for unemployed persons from different educational backgrounds, for example) and coverage has been low. Against the background of drastically declining age cohorts, better educational planning and the reorganisation of the network of vocational schools and training centres are seen as important means to offer a more attractive mix of profiles and modalities of provision, as well as granting wider access to students and creating more opportunities for inclusion. To attract more young people into vocational education and training, particular attention should be paid to young women and to students from weaker academic or poorer socio-economic backgrounds.

The quality of compulsory school outputs, as measured by the Programme for International Student Assessment (PISA), has improved since 2009. However, in 2015 the country's underperformance in each of the three PISA domains (science, reading and mathematics) was much higher than the EU average and far greater than the Europe 2020 benchmark (OECD, 2016). To raise the quality of vocational education, more attention should be paid to the instruction and professional development of teachers and trainers. Some vocational schools still lack basic learning resources such as textbooks or consumables for practical training. This is an issue that should be addressed immediately. To ensure the quality of the numerous private and not-for-profit training providers and their educational offer, the Albanian Qualifications Framework (AQF) should be implemented and used as an effective tool for streamlining the delivery of adopted learning outcomes at the national level.

The alignment of vocational education and training to the labour market is still weak. Available data suggest that the numbers of graduates fall short of the demand for workers with the requisite vocational education. Further, the skills, competencies and attitudes that young learners possess often fail to meet the needs and preferences of employers. To improve labour market alignment, social partners should be more systematically involved in Albanian vocational education and training. One useful step would be to give social partners a strong role in the identification of sector skills needs and qualifications, for example through sector skills committees.

In past years, many schools have been able to establish successful cooperation with businesses, and work-based learning schemes are now much more common throughout the VET system. However, such initiatives still depend to a great extent on donor support, which means that only a limited number of students can benefit from them. The upscaling of promising initiatives would require better coordination and stronger support from national stakeholders. To implement work-based learning country-wide in more schools and companies, the adoption of a national regulation system covering work-based learning is also recommended.