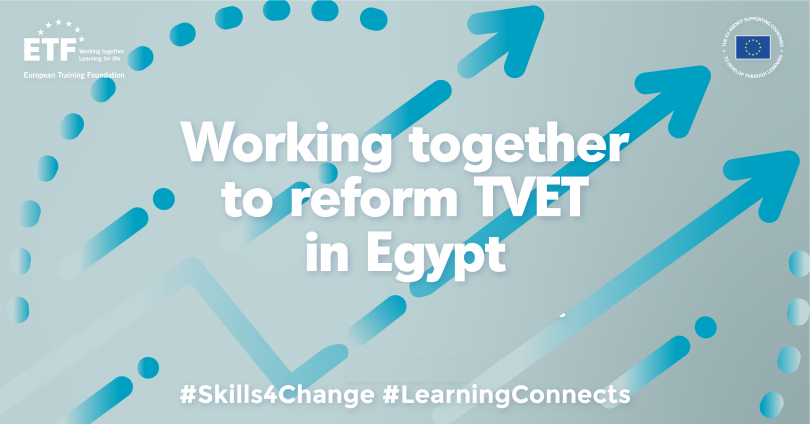 During ETF’s focus on Egypt this week, a Facebook live event on reforms in the technical and vocational education and training (TVET) system in Egypt was held in collaboration with Ahmed El-Ashmawi of the Ministry of Education, Maged Barakat, who heads the TVET Egypt programme, Ahlam Farouk of the European Union (EU) Delegation in Egypt, Pasqualino Mare of the European Training Foundation (ETF), with the ETF’s Alastair Macphail moderating.

Despite political upheaval, Egypt is experiencing positive economic growth even if it has slowed due to the impact of the COVID-19 pandemic. Its 2016 development strategy, Vision 2030, focuses in part on education, training, employment, and inclusion. In 2018, the government began a programme called Technical Education 2.0 to reform TVET. Ahmed El-Ashmawi, who is part of the advisory council for reform, began by saying that since 2014 and 2015 much effort has been made for Egypt’s social and economic development. The challenges concerning TVET include issues common to many developing countries: skills mismatch, an outdated curriculum, but also fragmentation in the governance of the system, funding issues and lack of a unified vision, he said. TVET should be incorporated much earlier in the education process and the image of TVET in Egypt needs to be worked on, as there’s the perception that it’s a second-class educational system.

These challenges are being addressed, said El-Ashmawi, with the help of the EU, the German development agency (GIZ) and the US Agency for International Development (USAID). Work on quality assurance is being finalised, and a unit within the ministry was formed to create awareness about the importance of quality in schools. Building the skills and competences of teachers is key, and in that vein, a new academy for teachers will be established. Looking at what other countries in the region are doing in TVET is also helpful, he said.

Ahlam Farouk said the EU, with the support of the ETF, has been contributing to Egypt’s TVET programme providing continuous support and technical advice. The current focus is to work with civil ministries, stakeholders, and private stakeholders to increase employability.

Maged Barakat said there was a nationwide initiative aimed at enhancing socio-economic resources, or human capital. Unifying the TVET system and transforming it from a content-based system to one based on competency is essential, he said, as is improving coordination and flexibility in responses.

Pasqualino Mare said ETF had an overview of Egypt's entire system, which helps when advising on the deployment of resources. A certain number of actions in the TVET program have gone well, he said, but other elements need to be improved, such as developing relationships with potential employers. The Egyptian system is fragmented, said Mare, and “people involved in the TVET programme need to work together, and agree on who is doing what.”

A system needs to be created to gather and translate information about the labour market, he said. A coherent approach is then needed to put policies in place.

In answer to how the COVID-19 pandemic had affected Egypt, Farouk said that the EU responded quickly and took measures in Egypt, working on expanding online training and e-learning, as well as prolonging the EU project for a further 18 months. Moreover, Team Europe, which was an EU response to the COVID-19 pandemic, is now working in Egypt in a cross sectoral initiative on two campaigns related to connective economy and society, and integrated water and food development.

El-Ashmawi added that the effort to focus on digitalisation and e-learning that had started before the pandemic was reinforced. Thinking ahead, he said, “in terms of technical education we are looking into being supported by different development partners. Managing the process is one aspect of digitalisation and the other is the actualisation of the content…We are still finding our way like other countries, but we need to focus on the process.”

In answer to a question from the audience about recognition of prior learning and certification of prior skills in Egypt, Barakat said that a policy concerning recognition of prior learning is being worked on, as many people in Egypt have skills but have not had an official education. This would help them get back on track with formal educational institutions. (ETF has been working on this topic with the European Bank for Reconstruction and Development (EBRD) and the Turkish government where skilled refugees are concerned.)

Finally, when asked about what Egypt can offer as advice about TVET to other countries, El-Ashmawi stressed the need for collaboration with stakeholders, employers and the private sector. Barakat suggested that an exchange of information between different countries, such as aligning objectives together, would be very helpful to better respond to Egypt’s requirements. Farouk ended by saying that coordination and leadership were key, with leaders in each area of TVET who can then mainstream all activities involved within the national system.