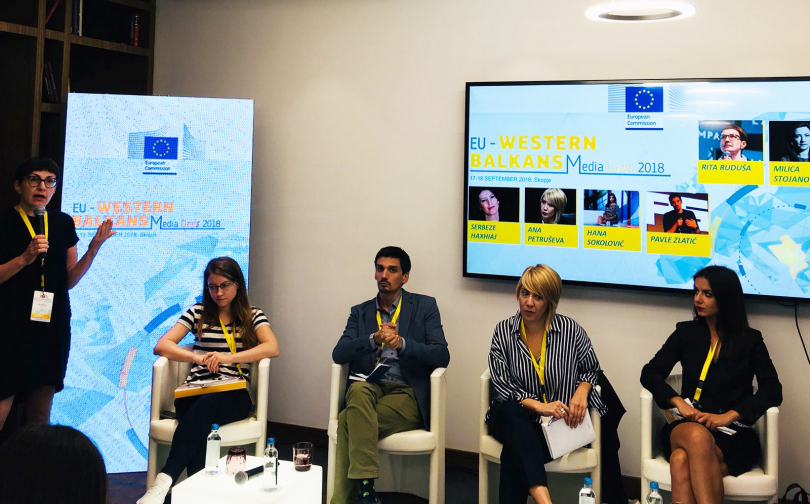 Skills: a key to pluralistic quality journalism in the Western Balkans

18 Sep 2018
Over 300 media professionals from the Western Balkans and beyond gathered in Skopje.

At the EU Western Balkans Media Days organized by the European Commission on 17-18 September, 2018, skills emerged as a key issue. For an environment in which quality journalism can thrive, skilled news producers and knowledgeable consumers are vital. Journalists need good formal and informal training to produce quality content, and citizens need to be educated to distinguish real from fake news.

As the EU Commissioner for the European Neighbourhood Policy and Enlargement Negotiations, Johannes Hahn, said: “Education, training are key to enhancing media freedom, and thus enhance democracy in accession countries. Pointing out that democracies need citizens that can distinguish quality content from the spreading fake news, he added that “training and education in the region must include media literacy, and this is a top priority for the EU”.

The former Yugoslav Republic of Macedonia’s Prime Minister, Zoran Zaev, highlighted the fragility in the region. “Fake news influences the fragile reality in the Western Balkans region. Sometimes they instill extremism, and it is a civil right to remove them. “We believe that citizens have the right to transparency, on the basis of verified information, and not speculation’ added Genevieva Calavera Ruiz, Director in charge of the Western Balkans at the European Commission.

Journalists from Western Balkan countries shared their concerns and forward-looking ideas about how to improve the quality of journalism through formal education, on-the-job training in the newsroom and lifelong learning. “We need to train the future generation of professional journalists, and we need to train them in the newsroom,” said Investigative Reporting Lab reporter Saska Cvetkovska. “The most important part of my learning was when I could learn from the most experienced colleagues” added Pavle Zlatić, digital media expert at IREX Serbia, highlighting the key role of mentoring. Milica Stojanovic from the Centre for Investigative Journalism pointed out that “journalistic skills include not only subjects like financial literacy or how to use social media, but also how to stay safe, even in the digital world”.

In his concluding remarks, Commissioner Hahn added “I am glad that education was at the core. But I would like to add that this does not start with education or training of journalists. It starts in schools, way before journalists training”.

The issue of skills needed for the future development of transition countries neighbouring the EU will be discussed at the conference ‘Skills for the future: managing transition’ organized by the ETF on 21-22 November in Turin, Italy. More here: www.skills4future.eu. More about the EU Western Balkans Media Days: www.euwesternbalkansmediadays.eu