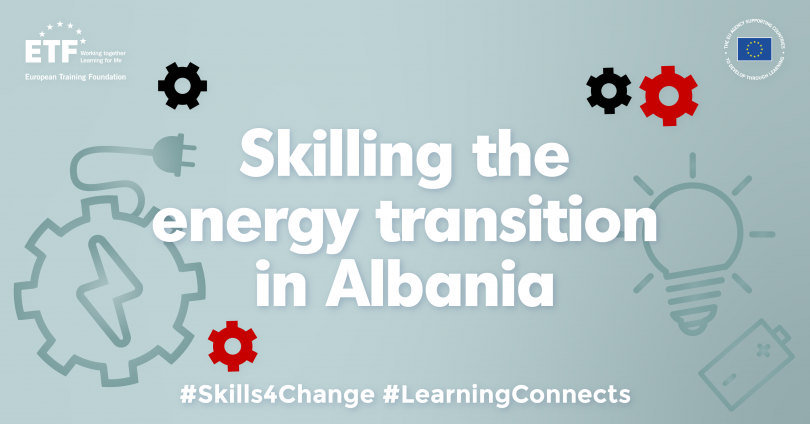 Skills for the Energy Transition in Albania

In the build up to the ETF webinar on the key findings of a study on the Albanian energy sector, the ETF held a #LearningConnects live broadcast on the topic. Dorina Islami of Schneider Electric and Albanian Skills, Ummuhan Bardak, ETF specialist on skills demand analysis who has been working on a series of studies on understanding the changing skills demand in neighbouring EU countries, and Romain Boitard, ETF specialist in human capital development and country liaison for Albania and Morocco, spoke with the ETF’s Alastair MacPhail on a variety of issues facing Albania and its transition to green energy.

While Albania relies mainly on hydropower for its energy system, with its 286 sunny days during the year and other natural resources it is well positioned to exploit renewable energies. The country is working to align itself with Europe’s green policy objectives and the Ministry of infrastructure and energy has already signed contracts for photovoltaic sites, said Dorina Islami.

Romain Boitard reminded listeners that by 2050 the European trading block aims to be carbon neutral, and the social inclusion dimension is of great importance, with all segments of the population benefitting from the opportunities created by markets for clean technologies and products. The target dates are far enough ahead in the future so that “we are working under assumption that Albania will be a member state by then.”

The EU is already Albania’s largest trading partner, added Boitard. However, skills gaps and shortages are major bottlenecks in the renewable energy sector.

Ummuhan Bardak, who worked on the changing skills demand in Albania study said that because there is a clear drive for greening policies in Albania, moving away from dependency on hydropower, there will be an undeniable need for new skills related to solar and wind energies, as well as natural gas. Curricula will need to be updated. The need for classical engineers will diminish as more specific solar energy engineers will be needed, as well as turbine technicians. Skills involving the operation of smart grids handling renewable energy supplies will be necessary. But soft skills are as important as technical skills for companies, and there is also a need for project and energy managers, power plant managers and people in business services and operations.

Technological and digital progress is happening so fast that “we are already in the future” said Islami. She pointed out the lack of decent labs in universities, as well as a shortage of skills necessary for project management and sales. Schneider is one of the private sector companies conducting internal training when skills needs are necessary and provides e-learning, coaching, and mentoring by senior staff. In general, said Islami, younger engineers and hires with good IT skills are more agile in their adaptation to new environments. Schneider also organises onsite visits to smart factories, virtual visits to smart factories in Plovdiv, Bulgaria, and uses new applications and software. “It’s a never-ending story to adapt to climate change,” she said.

Boitard warned that skills mismatch will only increase and that skills for jobs in the renewable energies sector need to be addressed today. “There is no formal training for photovoltaic installers in a country where there is so much sunshine. There is the production but also distribution of this energy. Companies have had to recruit outside Albania, which is a pity, since there are many talented people in the country, but they don’t have the skills,” said Boitard.  The ETF study on Albania echoes the needs that have been found to be lacking in other countries such as training programs focussed on renewable energy, deep links with the private sector, optimal use of digital technology, and teacher training.

A wider presence of the stakeholders should be considered, said Islami. Academia, government, industry, as well as young people should be part of the process. Demand comes from the private sector as well as the government, and universities and VET schools should respond to these demands in real-time, but the government needs to be a facilitator, she said.

Results from ETF surveys of young people, in cooperation with UNICEF, show that the threat to the climate is a major concern and many are interested in working in the green economy. Boitard emphasised that the green transition has many dimensions and that there must be a paradigm shift; a new mentality. Educational systems world-wide must consider this mindset from primary school onwards, he said.

Islami added that young people should consider a green economy as a top priority in their existence. This goal can be reached by learning new skills, and by following trendsetters and innovators, or innovative companies. Young people must “take bold and noble steps towards our green future,” she said.