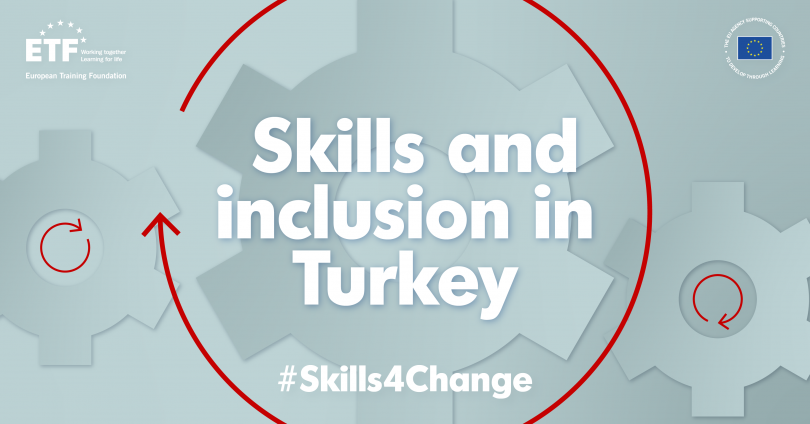 Skills and inclusion in Turkey

The ETF has a longstanding relationship with Turkey and has been cooperating with government and private institutions since the 1990s. Working on the issue of inclusion — ensuring that education is accessible to minority groups, women, young people and people with disabilities, no matter what social class they belong to and where they are located geographically — has been an important part of the ETF’s work in Turkey. Building on ETF’s experience with other partners was one of the cornerstones that led to the creation of an international network based in Istanbul called Skills for an Inclusive Future network (S4IF), which was launched on July 7, 2021.

Turkey’s Deputy Minister of Treasury and Finance, Şakir Ercan Gül opened the event which included speakers such as University of Oxford’s Carl Benedikt Frey, Biljana Radonjic Ker-Lindsay, from the European Bank for Reconstruction and Development (EBRD), Hewlett Packard’s Debbie McIsaac, Brisa Bridgestone Sabanci’s Nilgün Ozkan, and Gökhan Dikmener and Louisa Vinton of the United Nations Development Program (UNDP). The EBRD and the UNDP will work on this new initiative by providing disadvantaged populations with new skills allowing them to access the private sector. The S4IF network will implement sustainable strategies such as teaching much-needed ICT skills and other competencies that address the current skills mismatch.

These are areas the ETF has long focused on in Turkey, working with the government on policy development and with the private sector to ensure that both partners communicate effectively in a clear and articulated manner for the most effective skilling to take place.

In the case of Syrian refugees, the ETF partnered with the International Labour Organization, the World Bank, and the Turkish chambers of industry and ministries of labour and education to promote skills leading to economic opportunities for refugee-owned SMEs. With the backing of the EBRD, a vocational testing centre was set up in Gaziantep for the skills assessment and certification of both locals and Syrian refugees.

500 Syrians and host community members were trained in this centre resulting in 50 percent of them finding stable jobs. In south-eastern Turkey vocational education and training was improved via a public-private steering group to support businesses. Its

Women remain a huge untapped resource in the Turkish economy. Only one in three women in take part of the labour force: it’s the lowest participation rate among OECD countries. Approximately one-third of women employed are unpaid family workers in the agricultural sector, moreover a greater number of Turkish women are unemployed than men. The employment rate for women entrepreneurs is only 8.8 percent. The ETF partnered with EBRD to foster inclusive job opportunities for women and young people. This has resulted in nearly 17,000 loans for women going into business with 66 per cent of the loans given to women living outside major city regions. More than 2,500 women entrepreneurs have received business diagnostics through the “Women in Business”

programme. Additionally, the EBRD worked with its clients to attract more women to the energy sector.

The digital divide has always been a problematic factor, and during the Covid-19 pandemic the move to digital online learning was even more present. Women entrepreneurs were given enhanced online learning with, for example, training for crisis management in response to the pandemic. Inclusive and safe infrastructure programmes were set up to give women access to healthcare and transportion in the Istanbul metro, for example.

An example of regional inclusion that the EBRD worked on was training over 1,800 farmers in underserved rural areas in financial literacy or sustainable production.

By continuing to focus on regional and youth economic inclusion and gender equality, ETF and its partners will build on the groundwork that began several decades ago.