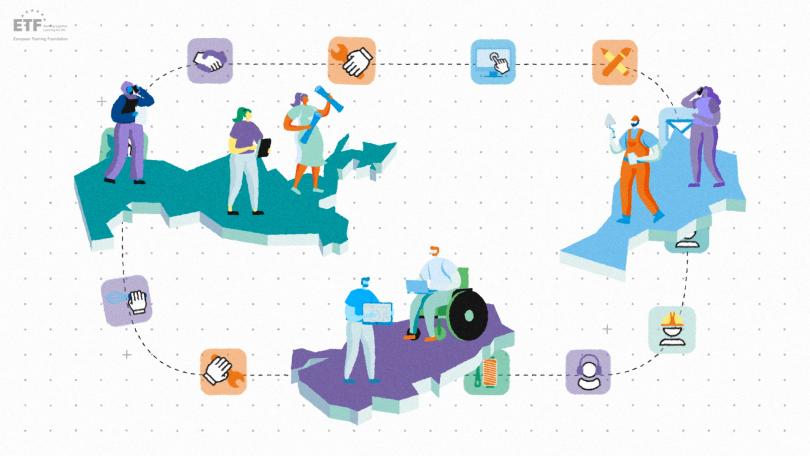 Skills, qualifications and credentials which demonstrate expertise and competence are the gateway to new opportunities. They signal the knowledge that people possess, enabling them to find decent work as well as explore new study and training opportunities, both at home and abroad. For individuals, qualifications are 'passports' to new horizons and possibilities. For countries, they are the foundations of a mobile and flexible workforce, skilled and ready to face the challenges of the future. But what happens if the skills and qualifications of one country are not recognised by another?

The European Training Foundation (ETF) has extensive experience in working with the EU’s neighbouring regions to support the development of qualification systems that are aligned to the European Qualifications Framework (EQF).

As Arjen Deij, ETF’s Senior Expert on Human Capital Development and Qualifications points out, 'Institutions and authorities are recognising the need to move away from paper-based qualification systems to digitalised systems which facilitate consistency and comparability, both nationally and internationally.'  He continues, 'As we see the internationalisation of labour markets, the advance of digital technologies and an increase in migration, being able to recognise another country’s qualifications has never been so important.'

And it is this idea that is at the heart of the ETF’s initiative to create a network of national qualifications databases that not only exchange information on qualifications but also 'speak' to each other.

'Such a network would enable the translation and comparison of everybody’s qualifications so that they could be understood by different systems and institutions anywhere in Europe,' explains Deij. This, in turn, would strengthen trust across EU and non-EU countries, and boost mobility and lifelong learning.

It is, indeed, a compelling idea. The development of a network of national qualifications databases would build upon existing tools to create a standardised yet rich and flexible 'common language' that can be tailored to the needs of individual countries and institutions without sacrificing the diversity of information about their qualifications.

As part of the proposed network, all countries will be able to 'translate' their qualifications, demonstrating how different qualifications relate to one another. Over time, more qualifications translated, and greater interactivity will help to connect learners and workers with better study and job opportunities.

'We will, in effect, be developing a skills and qualifications "ecosystem", ever-expanding as more and more countries get involved.'

There is a sense of urgency to start the development of this network, given that the global drivers of recent change, such as the Covid-19 pandemic, the Russian aggression against Ukraine and the impact of climate change, have resulted in a greater number of people crossing borders, looking to expand and improve their horizons.

'The number of people worldwide living outside their countries of origin is at a historical high. We need to put the skills dimension at the core of migration, making sure that migrants’ skills are recognised and valued, and that they are provided with the new skills that they might eventually need.'

In addition, the European Union has nominated 2023 the European Year of Skills, making the timing of this planned project even more pertinent. In her annual speech in September 2022, the President of the European Commission, Ursula von der Leyen, noted that the lack of relevant skilled staff is a huge challenge for companies, especially as they need to adapt to the challenges and opportunities posed by the digital and green transitions. Deij reflects on this:

'More and more institutions everywhere recognise the need to ensure a cohesive and collaborative approach to qualification systems. A network of national qualifications databases will help address this need.'

The ETF is uniquely placed to make this network happen. With nearly 30 years of experience in human capital development and providing policy advice to help partner countries make meaningful reforms to their education and labour market systems, the ETF can assist institutions and policymakers in their involvement in this network.

'The implementation of this network will ensure a harmonised approach to qualification recognition and will reduce the risk of individual countries dedicating limited resources to creating stand-alone systems. By providing technical expertise and guidance to Commission services, EU neighbouring countries and EU member states, we can make sure we move forward all together,' explains Deij. 'We have the vision and can foresee the real tangible benefits of this network, both for individuals and countries.'

The call to action is clear, as Deij concludes.

'As soon as the relevant EU institutions agree the funding, we can get countries involved in this initiative and forge ahead in an efficient and coherent way. This will enable all citizens across Europe and the EU’s neighbouring regions to create value and fulfil their aspirations, wherever life takes them.'