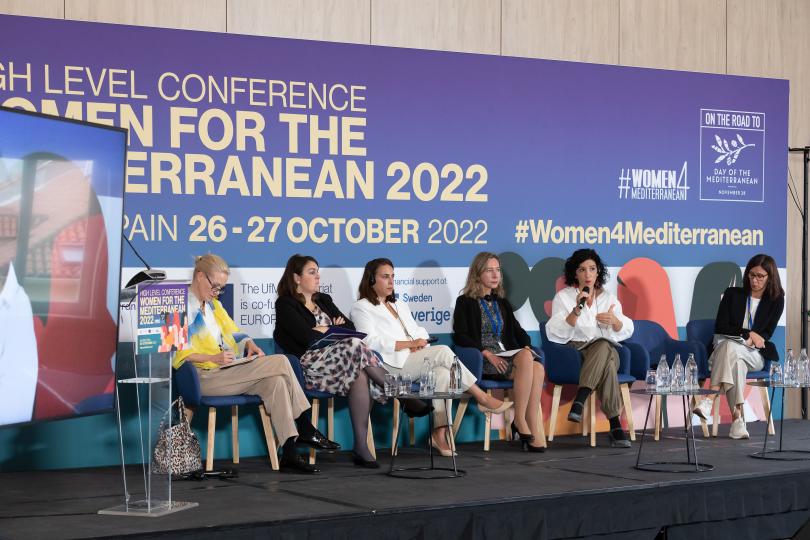 High Level Conference on Women for the Mediterranean 2022

Ensuring women's empowerment and women's rights is more important than ever in times of crisis, especially in the Mediterranean region which faces a unique set of circumstances in which it has to address global issues such as education, employment, health, water, food and energy security. And, it is at such times that the challenges women face are accentuated further.

The High-Level Conference on Women for the Mediterranean 2022, organised by the Union for the Mediterranean, has been taking place in Madrid 26 -27 October, bringing together Ministers from the Union for the Mediterranean (UfM) Member States and the UfM-Co-presidencies (EU and Jordan) as well as representatives of national, regional and international stakeholders from the public and private sector, including financial institutions and international donors. The Conference was preceded, on the 26 October 2022 by the 5th (UfM) Ministerial Conference on Strengthening the Role of Women in Society, which gathered Ministers of the 42 Member States of the UfM responsible for women's affairs and gender equality. Recommendations from Civil Society organisations from across the region informed discussions which will shape the roadmap for the implementation of the Ministerial Declaration and the regional agenda for the years to come, particularly towards an effective and inclusive gender equality policy, based on a gender transformative approach and the mobilisation of public and private actors in the region.

The ETF's Outi Kärkkäinen, Senior Human Capital Development Expert and Focal Point for Gender, participated in the session on Women's Economic Empowerment in the Regional Crisis as a panel member in the "Inclusive labour market for a sustainable and integrated economic system" session, presenting a joint ETF-Eurofound study launched in 2020 in 10 ETF partner countries on women's employment and work-life balance in the Mediterranean.

"The gender gap has remained the same or increased over the last five years," said Kärkkäinen. "Women have higher unemployment rates than men. NEET [those not in education, employment or training] rates among women are two or three times higher than among men. The majority of young women not in employment, education or training in the region are inactive non-students whereas most male NEETs are categorised as unemployed non-students," she continued.

Although women work fewer hours they spend considerably more time in unpaid household and care work, resulting in about 7.5 hours more work per week on average for women in the five Southern Mediterranean countries (Tunisia, Palestine*, Morocco, Lebanon and Jordan) that participated in the survey and 4.1 hours in the EU. Nevertheless, on a positive note Kärkkäinen highlighted that women tend to be more active in undertaking further training, including on-line training.

The final report of the ETF-Eurofound survey will be available in December 2022.

The experts’ contribution to the discussions, taking place across the two days will be important in stepping up cooperation, focusing on implementation, concrete delivery, and monitoring of impact, while enhancing the visibility of past, on-going and future initiatives.

The live stream of this session can be viewed here.

* This designation shall not be construed as recognition of a State of Palestine and is without prejudice to the individual positions of the Member States on this issue.