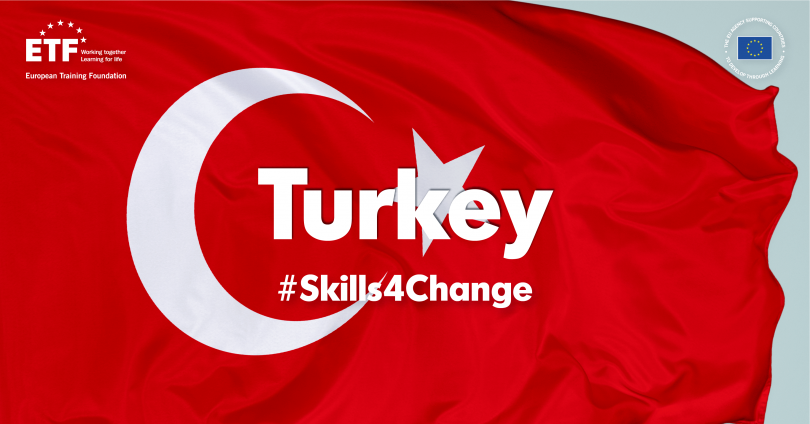 The European Training Foundation continues to shine the spotlight on some of the countries where we work. This week the focus is on to Turkey.

Turkey is the second largest nation by population among the ETF’s partner countries, and by far the largest economy. A newly industrialised middle-income country bridging Europe and Asia, Turkey spans a huge diversity of social and economic realities from the industrial and commercial megalopolis of Istanbul, with over 15 million inhabitants, to the tourist centres of its western and southern coast, and remote rural and mountain regions largely dependent on traditional small-scale agriculture. In the past decade, Turkey has sheltered 3.6 million refugees from the conflict in Syria, the largest refugee community in the world.

Turkey remains a candidate country for European Union membership - though accession negotiations are effectively at a standstill since 2019 - and a beneficiary of financial assistance under the EU Instrument for Pre-accession Assistance (IPA) to the tune of €4.8 billion in the 2014-2020 period. Turkey has continued to show strong commitment to EU policies in the field of education and training, for example through participation in the ET2020 Working Groups, implementation of the EU priorities for VET 2015–2020 (Riga Conclusions), commitment to the European Alliance for Apprenticeships (EAfA), as well as to EU-Turkey cooperation in supporting refugees. Turkey joined a customs union with the EU in 1995, and the EU is by far its largest import and export partner, as well as its main source of foreign investment.

Increasingly industrialised and urban, Turkey is the world’s 11th largest economy in PPP terms according to the latest IMF data. Turkey has a relatively young population, with over half its citizens under the age of 32. This represents a potential demographic dividend for the country. However, youth unemployment stands at nearly 26%, and nearly 30% of young people between 15-29 are neither in employment, education or training (NEETS). This disproportionately affects young women, of whom 32% are unemployed and 40% NEETS. The country’s overall female employment rate, at under 30%, is less than half that of men (66%). This points to a significant untapped potential of young people and women.

As a country on the cusp of joining the world’s top ten economies, and moving from middle to high-income status, Turkey’s human capital priorities are very much linked to the country’s drive to become a high-tech, high value-added economy and increase the skills and productivity of its workforce in readiness for the fourth industrial revolution. These ambitions were enshrined in the country’s Education Vision 2023, which foresees wide-ranging reforms of the whole education and training system. Improving the quality of education and training and raising the overall educational attainment of the population are key priorities, as is upskilling the adult population through lifelong learning. The reform also aims to increase the attractiveness of vocational education and training, expand provision and bring it closer to the world of work by involving employers more in the system.

Through its cooperation with the Turkish Government, the EU Delegation, the ERBD and a wide range of national and international partners and stakeholders, the European Training Foundation has been supporting the roll-out of Turkey’s Education Vision 2023 for the TVET and lifelong learning sectors.

“The ETF has been a driver for joining up the dots of the system” says ETF senior expert Lida Kita, who coordinates the ETF’s activities in Turkey. “Through our knowledge and networks we have been able to link up the national, EU and international actors and facilitate policy dialogue at the highest level.” At the same time, through its support to the EU external services, the ETF has shaped EU support for Turkey on the skills agenda.

The ETF gives input to EU policy monitoring mechanisms on VET, employment and social inclusion including an annual assessment of Turkey’s Economic Reform Programme, and wider human capital developments reported in the Torino Process. The ETF has also provided expertise input on a range of themes ranging from digital skills, to qualifications, work-based learning, skills for the future, the validation of non-formal and informal learning and centres of vocational excellence.

The EU is supporting the Turkish Government through the IPA programme in establishing sectoral centres of excellence as a means of improving the quality of vocational education and training, and over 50 Turkish vocational institutions have joined the ETF’s Network for Excellence. An important dimension of the ETF’s work in Turkey has been its strategic partnership with the European Bank for Reconstruction and Development (EBRD). The ETF has provided expertise and advice in a range of EBRD-funded initiatives to promote inclusion through skills and economic opportunities, including for Syrian refugees. Carried out in cooperation with the Turkish government, national stakeholders, and other international donors, these include tailoring advisory support to the needs of refugee-owned SMEs, establishing a vocational testing centre in Gaziantep for the skills assessment and certification of both locals and Syrian refugees and improving vocational education and training through a public-private steering group with the Ministry of Education.

“It’s all about partnership” says Kita. “Through EBRD, we engage the private sector in skills policy, and we work through the national system to serve everyone.”