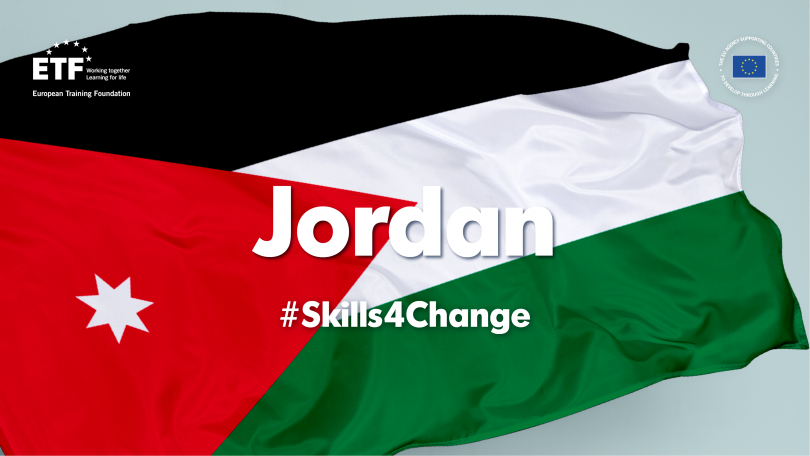 In the coming weeks, we are shining the spotlight on some of the countries where we work. This week, the focus is on Jordan, where the European Training Foundation is supporting the modernisation of the vocational education and training system in cooperation with the Jordanian Government, the European Union Delegation, the European Bank for Reconstruction and Development, and other partners and stakeholders in the country.

The Hashemite Kingdom of Jordan is middle-income country with a population of 10 million. As a relatively stable nation in an unstable region of the world, Jordan has sheltered successive waves of refugees from neighbouring countries. Most of the 2 million Palestinian refugees are now Jordanian citizens, and most of the 1 million Iraqi refugees have now returned home. However, refugees and migrants still account for nearly one-third of the country’s population, including an estimated 1.3 million Syrians.

Jordan and the EU

The European Union and Jordan have been linked through an Association Agreement since 2002. Jordan was the first Mediterranean country to be granted "Advanced Status" in its partnership with the EU in 2010, with the aim of promoting peace, stability and prosperity based on shared values including the rule of law, good governance and the respect for human rights.

The EU-Jordan Partnership Priorities, which build on the Government of Jordan's national strategies, focus on three objectives: macro-economic stability and sustainable and knowledge-based growth; strengthening democratic governance, the rule of law and human rights; and regional stability and security. Cooperation is also being pursued on cross-cutting issues such as migration and mobility as well as economic, social and political inclusion of vulnerable groups, including youth and women.

Promoting skills development and youth employability through the reform of the country’s education and training system are a key part of this process. The European Union has been supporting Jordan’s efforts to modernize its technical and vocational education and training through a succession of budget support programmes. Through such mechanisms, the country’s government receives additional funding to its budget linked to the achievement of agreed targets. This is typically combined with technical assistance to build the country’s capacity to develop and implement policy in the sector.

In Jordan, the European Training Foundation has been providing expertise and policy advice to the government in developing its policies and strategy, and to the EU Delegation in designing its interventions and keeping them on track.

ETF senior expert, Mounir Baati, is responsible for coordinating the ETF’s activities in Jordan. “Something we’ve been doing for the first time at the request of the EU Delegation and national stakeholders is preassessment” he says. “Instead of waiting to assess if the indicators have been achieved at the end of the year, we come during the year and look at how likely it is that the indicators and the targets will be achieved, and what the problems and challenges are.” In this way, the national stakeholders still have time during the year to address any problems. The ETF’s preassessment report was used by both the EU Delegation and the national stakeholders to track progress, and was discussed by the steering committee of the budget support programme. “And it was used well” says Baati. He cites an example of the Ministry of Education going to the Ministry of Finance asking for extra budget, because if they don’t have extra budget, they will not meet the target and therefore lose the budget support funding. “So they were saying, well, give us three hundred thousand euro and we will achieve the targets instead of losing two million.” Indeed, one of the objectives of budget support is to engage the national stakeholders, the line ministries and the Ministry of Finance about resources.

Besides the preassessment of the budget support programme, the ETF carried out a mid-term evaluation of the whole European Union intervention, and it has been supporting the implementation of technical assistance through reviewing deliverables and organising a study visit to Morocco to look at a different model of governance.

The European Training Foundation is also working with the European Bank for Reconstruction and Development on issues of social inclusion and skills. In Jordan, the EBRD is supporting the tourism sector, and the ETF has been providing advice and expertise to develop a skills strategy for the industry.

He identifies another challenge in the lack of knowledge about the dynamics of the labour market and hence the limited capacity to adapt training provision to meet the needs of employers.

However, Baati sees significant improvement. In 2016, a working group was established by the King to review the whole system. It came up with a human resources development strategy. “The document is very good quality and addresses the real issues” says Baati. “They haven't managed to put into motion all the recommendations of the the strategy, but it is changing the governance of the system.”  A commission in which the major stakeholders are represented has been set up to oversee the TVET system and sector skills councils have been established in a number of promising economic sectors. These are led by the private sector and are bridging the gap between the TVET system and the labour market.

“We haven't yet seen the full impact of these governance reforms on the performance of the system” says Baati “but things are definitely moving in the right direction.”