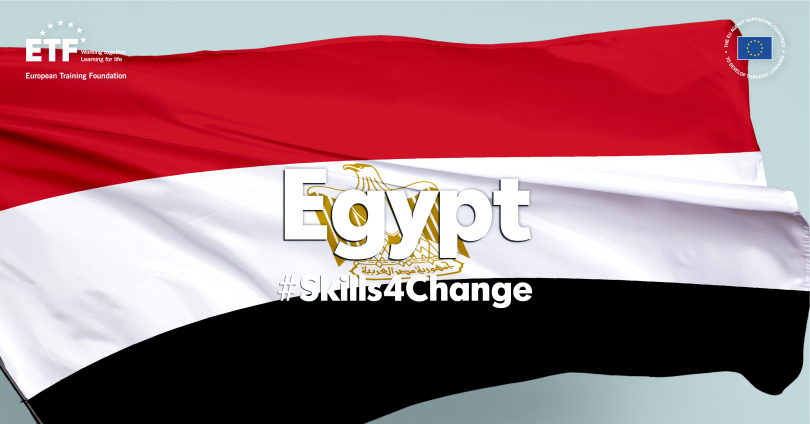 This week our focus moves from Turkey to Egypt, another country spanning two continents, in this case Africa and Asia. We plan to focus on how the Egyptian Government, the EU and the ETF, in cooperation with many national and international partners and stakeholders, are working together to create opportunity for Egypt’s citizens through skills development.

With over 100 million inhabitants, Egypt is the second largest of the ETF’s partner countries by population. Egypt is classified by the World Bank as a lower middle-income country, with a GNI per capita of US$ 3,000 in 2020. Unlike other countries in the region, Egypt has enjoyed positive economic growth and rising per capita GPD in recent years, despite political and economic upheavals. As elsewhere, the COVID-19 pandemic had a negative impact, but the Egyptian economy continued to grow albeit at a lower rate.

Egypt has a large manufacturing sector - including motor vehicles, consumer electronics, chemicals, steel and textiles – accounting for 16% of GDP and 14% of jobs. Agriculture remains important in Egypt, contributing 11% of GPD and 28% of all jobs. Services account for just over half of the country’s GDP. These include tourism, which has been hard hit by the COVID-19 pandemic, and a burgeoning tech sector.

An important resource for the country is its large diaspora community. According to official statistics, some 9.5 million Egyptians live outside the country and remittances from emigrants accounted for 8% of GDP in 2020.

Egypt has a large informal economy. Estimates vary, but it is claimed some 60% of jobs, and 30-40% of GDP are informal. Informality is associated with low pay, poor productivity, bad working conditions, poverty and insecurity.

Egypt shares many of the human capital challenges of the southern and eastern Mediterranean region. The economy struggles to generate enough jobs for a young and growing population, especially decent work in a context of high informality. There is a significant loss of human capital potential owing to the high level of inactivity and unemployment, particularly among young people and women, to skills mismatches and emigration, especially of the young and highly educated.

Egypt’s development strategy is enshrined it the country’s Vision 2030, adopted in 2016, in which education, training, employment and inclusion feature prominently. In 2018, the Egyptian Government launched an ambitious programme of reforms of technical education. Technical Education 2.0 aims to improve the quality and relevance of technical education by implementing competency-based curricula, boosting teacher training, enhancing employer engagement and expanding work-based learning. One of the main outcomes of this strategy is the Applied Technology Schools, established under partnerships with employers, delivering internationally recognised qualifications.

The European Union is supporting the implementation of this strategy through the TVET Egypt programme, large-scale initiative, co-financed by the EU and the Egyptian Government. This is the lastest iteration of a series of EU programmes supporting the development of the sector over the years.

The ETF has been supporting the Egyptian Government and the EU Delegation in developing and implementing their actions in this sector through policy analysis and advice.

“The main challenges are very much reflected in the TVET programme” says Pasqualino Mare, ETF Human Capital Development Expert, who coordinates the ETF’s activities in Egypt. “There's the quality the whole system, in terms of provision and certification. There is a problem of Governance. Governance means working together, and that’s a big challenge in Egypt because of the size of the country and the complexity of the system. And there is the classic challenge of involving the private sector.”

“At the ETF, we have an overview of the whole system” says Mare. “And this is very valuable. We don't look at Egypt from one angle. Our overview enables us to give good advice on how to deploy resources in terms of actions and objectives.”

The ETF has worked with Egyptian stakeholders on quality assurance in VET. The ETF also supports the broader policy dialogue with input to bilateral subcommittee meetings, monitoring of European Neighbourhood Policy action plans and annual country updates. The ETF reports on wider human capital developments within the Torino Process, the fifth round of which was launched in Egypt in April 2019.

On Wednesday 4 August at 16:00 CET there will be #LearningConnects live broadcast on how the Egyptian Government, the EU and the ETF work together to support TVET reform in Egypt.