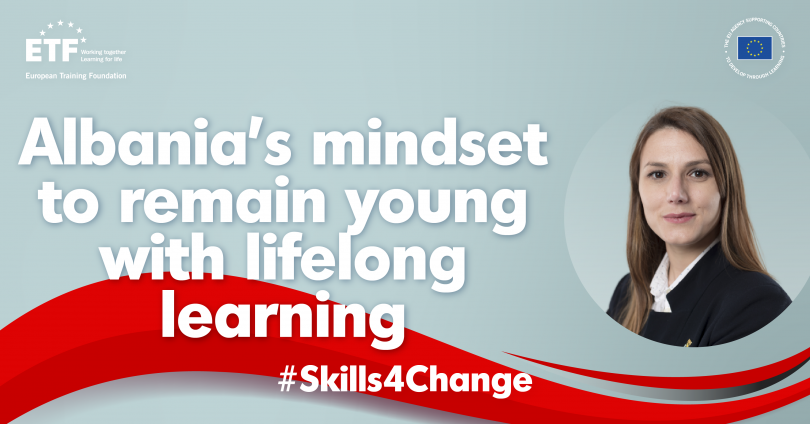 Last May, Bora Muzhaqi became Albania’s deputy minister for education, sports, and youth. At 31, this is Deputy Minister Muzhaqi’s first position in government, and it’s where she has always wanted to be. Although she studied economics and international business in the UK and subsequently worked as an international tax consultant, Muzhaqi had originally wanted to study politics but chose economics because it was challenging, and “every good politician needs to know economics,” she told ETF in a recent interview.

She says she went to the UK at age 17 to get a better education, but always intended to return to Albania, where she saw her future. The urge to contribute was inculcated by her parents, says Muzhaqi, who believes that making a difference in one’s own country is where an impact can be strongest.

But arriving back in Albania after her studies, she realised it wasn’t so easy to get into politics. She worked for international companies, and after five years “finally an opportunity arose where I could be involved in policy making.”

Muzhaqi began working for the European Bank for Reconstruction and Development (EBRD) to establish a better business climate and got a better idea of what the issues were for businesses in Albania. As advisor to the minister of state for the protection of entrepreneurship, Muzhaqi began to draft a law for innovative startups.

The project was in conjunction with the EU and from the start, consultations were held with young, talented people involved in startups, which was a new way of working for Albania, says Muzhaqi. “The law was written but fully reflected what the ecosystem needed. This was the keystone. If you want to make a difference, it has to be from within the government.”

When Prime Minister Edi Rama opened a platform to encourage people to join the Socialist party and run to become a member of parliament, Muzhaqi saw her chance. The focus of her platform was youth and innovation, and when she was elected, she naturally moved into the ministry of education, sports, and youth.

When Muzhaqi speaks to young Albanians, she says it’s essential to be approachable: she addresses them with the informal “you”, handles her own social media accounts, tries to respond personally to messages, and tones down the way she dresses. The key, she says, is to keep the channels of communication open, and not to just hear, but really listen. On the subject of employment Muzhaqi has held lectures and seminars on career-building, which she says is not her specialty, but simply having gone through the motions in the UK of applying for 50 jobs to get one interview, she knows how difficult looking for a job can be. Sometimes, she says, it’s simply a matter of resolving procedural issues.

Regarding one of Albania’s key issues, migration, Muzhaqi says it’s “an important part of globalisation, we shouldn’t be scared of it; it’s an opportunity to get an experienced workforce… But I think about how we can get these people to come back to Albania.”

The government is working on an initiative called “Ready for Albania”; a call to Albanians all over the globe, asking them what they can do for their country. “Our country needs it. In more developed countries you don’t feel that need but in countries still developing you have that calling to come back and help out, it doesn’t have to be something big, even opening a business is something.”

Within the Ministry, Muzhaqi focuses on the youth and innovation sector and is working on a three-prong approach. The first is restructuring the way technology is taught to children in a more interactive manner and ensuring that they have access to it all over the country. Young children are already learning to code in Tirana and Korçë in innovation centers, but Muzhaqi would like to see more of them open up, and she is working on launching an IT park. Her second approach is to have more arts and crafts taught in schools. Even if they are not always included in the core curriculum, Muzhaqi says there should be after-school classes, whether in music, art, or learning “how food is grown, how to take care of the earth, and this is linked to climate change. Even though it seems very simple, it gives you a bigger perspective of the world we live in. We want well-rounded individuals. In a music class, you learn the discipline of practicing. This is useful in all ways and later in the workforce.”

Lastly, the Ministry is working towards a new strategy for higher education by supporting joint degrees with universities in other countries, as well as encouraging foreign universities to open branches in Albania. Negotiations are underway with several countries, says Muzhaqi. Given that Prime Minister Rama will begin his third mandate in September, “we have more time to continue strategies which we’ll build for 2030. We can have a broader vision to look towards the future.”