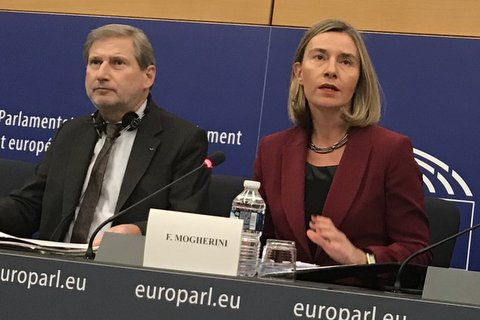 Employment, education, social policies, governance, the digital agenda and youth – areas included in the European Commission’s six new initiatives to support the path towards EU integration for the Western Balkans.

The Strategy includes six flagship initiatives covering the rule of law, security and migration, socio-economic development, transport and energy connectivity, the digital agenda and neighbourly relations, with concrete actions foreseen between 2018 and 2020. The initiative for Socio-Economic Development includes support to start-ups and SMEs, a focus on employment and social policies, in particular education and health. The initiative for the Digital Agenda focuses on boosting digital skills and infrastructure.

High Representative/Vice-President Federica Mogherini says the strategy provides a ‘shared, clear, unequivocal, credible and concrete perspective’ for each country’s integration. ‘To make the process of the Western Balkans towards the European Union irreversible and keep reuniting the Continent.'

Commissioner for European Neighbourhood Policy and Enlargement Negotiations Johannes Hahn said the Union door is open. ‘We are strengthening the enlargement process which requires credible efforts and reforms in return in particular to strengthen the rule of law. We have to work for the benefit of the citizens.’

The EU's enlargement policy is part of the larger strategy to strengthen the Union by 2025 set out by President Juncker in his 2017 State of the Union speech and Roadmap for a More United, Stronger&nbs p;and more Democratic Union. In order to meet the EU membership criteria, comprehensive reforms must be realised, in particular, through the rule of law - fundamental rights and governance, judicial reforms corruption and organised crime. Public administration and economic reforms must address structural weaknesses, low competitiveness and high unemployment rates. Reconciliation and solving open issues is another key focus area.

Next Steps on the EU path

The EU is the most important investor, political and trade partner of the Western Balkans. To deliver on the Strategy, the Commission proposes to gradually increase funding under the Instrument for Pre-Accession Assistance (IPA) until 2020. In 2018, €1.07 billion of pre-accession assistance for the region is foreseen, on top of almost €9 billion 2007-2017.

The Strategy explains the steps that need to be taken by Montenegro and Serbia – the only two countries with accession talks already underway - to complete the accession process in a 2025 perspective. Albania and the former Yugoslav Republic of Macedonia are making significant progress on their European path. With sustained effort and engagement, Bosnia and Herzegovina could become a candidate for accession. Kosovo* has an opportunity for sustainable progress through implementation of the Stabilisation and Association Agreement.

The economic potential of the EU's&nbsp ;relations with the Western Balkans

The way forward in view of a possible 2025 perspective

* This designation is without prejudice to positions on status, and is in line with UNSCR 1244 and the ICJ Opinion on the Kosovo declaration of independence – hereinafter “Kosovo”.