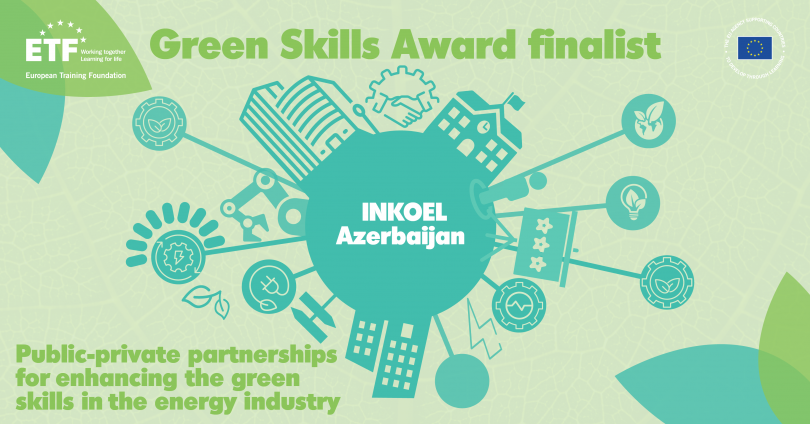 Azerbaijan is one of the world’s oldest oil producing countries, and is still highly dependent on revenues from ‘black gold’. A shift towards a more sustainable economy has not been a top priority, but with the world edging towards a green energy transition, and the country’s capital, Baku, suffering like so many cities from over-congestion, traffic jams and pollution, renewable energy is garnering attention.

Yet while renewable energy projects, solar panels, and wind turbines are popping up around Azerbaijan, there is a shortage of green skills.

For firm INKOEL, the first Azerbaijani installer and developer of renewable energy in the country, it has spent a decade drumming up new business but also having to spread the message about the upsides of renewables.

“In Western Europe and the Far East the renewable energy market is well developed and there are lots of apprenticeships. Our mission has been wider than expected, as it is a completely new sector for an oil-dependent country. Apart from doing business, we’ve had to promote green skills and renewables,” says Ramin Hakimov, Head of Business Development and Sales at INKOEL.

With Azerbaijan a signatory to the Paris Climate Agreement, committing to reducing carbon emission by 35 percent by 2030, and for 30 percent of electricity to be produced by renewable energies, the skills gap is becoming pressing.

“We have to make sure Azerbaijan has enough skilled engineers for utility-scale renewable energy projects,” says Ramin.

INKOEL has held multiple seminars and workshops in cooperation with the education ministry to highlight the gap in the market and the need for green skills to be developed. It has taken the idea further by developing a Smart Innovation Hub to teach green skills and provide apprenticeships to recent graduates.

The concept will enable INKOEL to educate future engineers it can utilise for its own upcoming projects, which ranges from solar power and wind turbines, to batteries and electric vehicle charging infrastructure, as well as for the country at large.

To be based in Baku, the hub will train 100 students and 50 academic staff in the first year.

“It is small due to budget restrictions, but also to show the government that we have results, and then we will make it more scaleable,” says Ramin.

Teacher training on green skills will be the core focus. “When you teach one teacher, you have more probability of upskilling new students,” he says.

Students will be educated in parallel with the teacher training, while the hub will connect students with industry partners for apprenticeships.

Large scale renewable energy projects are being rolled out throughout the Caspian country. British energy giant BP is investing in a 240 mega watt solar power project, while Germany’s Porsche, together with INKOEL, is installing electric vehicle charging infrastructure and for residential communities.

“Baku is often polluted due to the high number of cars and traffic jams. It can be difficult to breathe,” says Ramin. With more electric vehicles being imported into the country, it is essential that the infrastructure keeps pace. “The city has to introduce solar panels, but there’s not really the space, so they will have to be on roofs or solar car ports. To do all this needs a new kind of employee.”

While the country could re-train oil sector workers with the relevant green skills, there has been a strategic focus to “start from scratch,” says Zamin. “If we have engineers making a transition from oil companies to renewables, it will be more challenging for them and for us. For better short term results, we have to develop academic courses and practical learning.”

INKOEL has also been in developing a prototype of a national smart village, which is to be expanded into smart city projects, under the patronage of the president. The prototype smart village is in Aghali, in the area of Zangilan in Karabakh. “If the future is to be electrified, then we must have the infrastructure to raise the number of users,” says Zamin.

INKOEL’s project also aims at raising awareness among school and university students about renewable energy to push for solar-power to be installed, particularly in more rural areas where there are electricity shortages.

“We want the smart innovation hub to be a bridge between academia and businesses. The main mission is to adopt industry 4.0 in education and industry by the end of the decade. This will ensure the next generation has a healthier environment, and is aware of green energy and able to benefit from it,” says Zamin