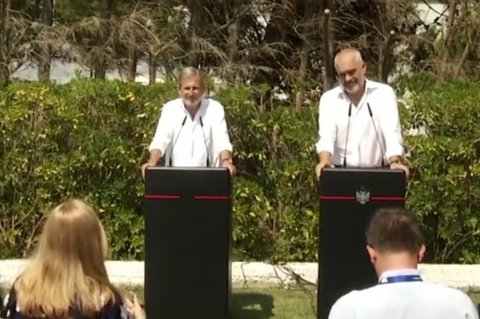 30 Aug 2017
ETF partner countries Albania, Serbia, Kosovo*, Bosnia and Herzegovina, former Yugoslav Republic of Macedonia and Montenegro are moving forward with plans to consolidate a market of some 20 million people to boost business, jobs and growth across the region.

ETF partner countries Albania, Serbia, Kosovo*, Bosnia and Herzegovina, former Yugoslav Republic of Macedonia, and Montenegro are moving forward with plans to consolidate a market of some 20 million people to boost business, jobs and growth across the region.

The meeting in Albania follows the successful Western Balkans Summit, held in Trieste, Italy in July, where plans for the economic regional integration were initially discussed between leaders of the six countries. Leaders from Austria, Croatia, France, Germany, Slovenia, the United Kingdom and high-ranking European Union (EU) officials joined the summit.

Digitalisation, entrepreneurial skills, labour mobility, smart specialisation, mutual recognition of qualifications and public private partnerships to enhance work-based learning in VET were among the topics discussed in detail at the Trieste summit. Read about the ETF’s involvement here.

Commissioner Hahn welcomed the follow up meeting in Albania, describing the move towards regional economic co-operation as ‘an integral part’ of the countries' EU accession process, one that would particularly benefit citizens.

‘The Regional Economic Area is … simply supporting all the countries in the region in their European aspirations,’ he said in a joint press conference. ‘It helps the countries and its citizens to improve living conditions.’

He noted that exports to the EU by the six countries has doubled in the past ten years, accounting for €46 billion. However, trade amongst the countries, for the same period had not increased.

‘This shows that there is a lot of potential. This is the idea behind the regional economic market. I am grateful for this initiative and the spirit to create ownership of this process in the region.’

Albanian Prime Minister Edi Rama said the development is a ‘fundamental transformation of the movement of goods, service, capital, qualified employees to make the region more attractive to investment, flexible in commercial exchange and speed up its economic growth and well-being along the road to the EU.’

He emphasised that the plan was not being led by Brussels: ‘It’s a big turn … that we don’t need tutorship to meet, organise, to discuss … but we should not forget that Brussels is key! It’s a strategic partner for the region, for all the countries, and I am very grateful the Commissioner Hahn is here to accompany the process.’

Watch the full press conference below.

*This designation is without prejudice to positions on status, and is in line with UNSCR 1244 and the ICJ Opinion on the Kosovo declaration of independence