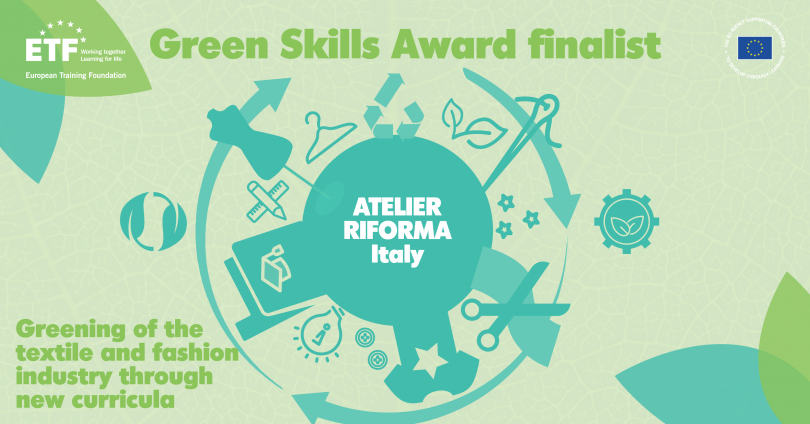 Elena Ferraro and Sara Secondo are passionate about fashion, though neither could be described as dedicated followers of fashion. Their passion is for repurposing old clothing for new in a bid to combat the huge contribution to climate change made by today's modern global fashion industry.

The two young women - neither of whom has a background in fashion - set up their innovative start up Atelier Riforma in Turin, Italy, last year after making an informal start in 2019. The small company is dedicated to upcycling clothing and challenging the ecologically wasteful assumptions of modern fashion.

As finalists in the European Training Foundation's Greenskills Awards - which were announced last June as part of a four-day online event "Building lifelong learning systems: skills for green and inclusive societies in the digital era" - Atelier Riforma aims to make a big impact from a small start.

"We created Atelier Riforma primarily to reduce the environmental impact of the fashion industry," says Elena, whose academic background is in food science and hygiene (Sara is a lawyer by training.)

"In doing this we also pay attention to other social impacts of our activities, which is why we also involved social tailoring workshops - groups that promote social inclusion that work with immigrants, or ex-offenders, or woman who have escaped abusive relationships, for example."

They are also collaborating with two vocational training schools, working to develop and deliver upcycling courses to fashion students who will become the fashion industry professionals of tomorrow.

The importance of re-using, repurposing clothing, rather than merely recycling is underscored by the practicalities of mechanical recovery of textiles and fibres. Recycling requires energy inputs to deconstruct garments, recover the textiles and make new materials; multi-fibre garments - often mixing manmade and natural textiles - are difficult if not impossible to recycle. Upcycling requires no more than the added energy of tailors, milliners, knitters and others from crafts that are fast becoming extinct under the pressure of the modern fashion industry.

Elena cites some common, but still startling statistics on just how big an environmental impact the fashion industry has on our planet: research data from the EU (particularly the EEA) shows that in 2015

It is figures like this that prompted Elena and Sara to work with fashion schools - Turin's Istituto di Moda Burgo and Rome's Accademia Italiani di Moda e Courture - where students may not be aware that by extending the life of a garment by a mere nine months, you reduce its environmental impact by 25%.

So what does upcycling actually mean? Elena smiles and says it is more than simply repairing old clothes, for her upcycling is a means of making a fashion statement through repurposing clothing.

"One of the social enterprises we work with involved tailors from Africa who use old jeans to make bakcpags and bags that are combined with colourful African fabrics; another group of Islamic women mix Islamic style with western to create new and culturally interesting garments," she says.

They also collaborate with a workshop run for ex-offenders, who can learn new skills to help them re-enter society and steer clear or crime, and in Sicily a safe house for women victims of abuse, who use tailoring as a way to earn an income while moving beyond a difficult and fearful time.

Elena agrees that in many ways upcycling reflects older approaches to reusing and repurposing items in our lives: her grandmother would redesign fashion items given to Elena as a child that she did not like, and this was one of the inspirations for setting up the Atelier.

She hopes that Atelier Riforma's work - and social media campaigns encouraging upcycling - can help create a virtuous cycle that encourages a circular economy in fashion.

"We believe the way to do this is to show that upcycling is not only useful, but also beautiful. Those who are already sensitive to environmental issues already carry out these sustainable behaviours - so it is necessary to convince those that are not informed, or aware of the issue."

Upcycled clothing may not appeal to classic 'fashion victims' she adds, but by wearing "unique clothing you can stand out from others and show your vision of the world."

Related Activities
Skills for the future