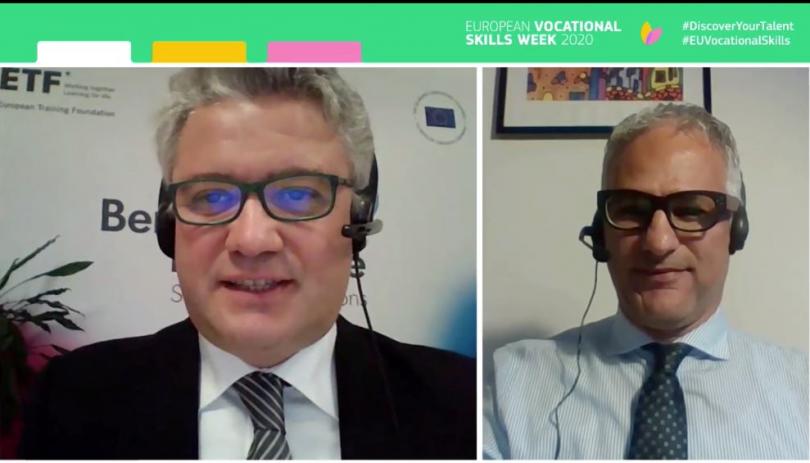 The importance of international connections and the mobility of students and trainers - although hampered this year due to the pandemic - will become an increasingly important feature of Vocational Education and Training in the future, participants in a conference hosted by the EC and ETF as part of the EU Skills Week heard Thursday.

Klaus Fahle, director of German national agency, Education for Europe, opened with a survey of the extent to which Germany had integrated internationalization into its VET systems for many years after understanding how importance this was to an export-led economy.

Over the past three years a National Mobility Programme Training Worldwide - which covers all countries not eligible for Erasmus+ progammes - had involved 1,300 apprentices and trainers in 250 separate projects, often designed and implemented by companies themselves with the fund's backing. Mostly micro-programmes specifically tailored to a company's needs, the trainings were focused on key export partners - the US (23% of projects) and China (21%).

Dita Traidas, president of WorldSkills Europe, spoke of the importance of celebrating international skills competitions as a driver for developing better qualifications networks and state of the art skills in young people.

The international skills Olympics enabled industry to set new agendas for market relevant skills and for international benchmarking to be achieved, she said.

Prof. Joachim James Calleja, President of European Forum for Vocational Education and head of a large technical college in Malta, agreed: "The target with VET is to have a workforce prepared to hit the ground running; industry moves at a faster pace than VET. Enhanced skills and competencies is what we are aiming for through international cooperation in skills provision," he noted.

Soo-Hyang Choi, Director, UNESCO-UNEVOC International Center for Technical and Vocational Education and Training sounded a warning bell, warning that the pandemic may produce "in the short term a chilled appetite for international cooperation" as politicians sought protectionist measures; but the modern economy was now so interconnected that it would actually drive a greater need for "more cooperation, collaboration and harmonization of qualifications."

The ETF's experience in supporting the development of policies for the provision of better internationally integrated skills provision, demonstrated the demand that existed across EU partner countries, ETF director Cesare Onestini said.

The key challenge in supporting international skills was in implementation - being clear about goals, understanding cultural and systemic differences and unleashing the energy of those committed to change, he said.

"We need clarity of goals - is this political or industry driven - to promote economic growth, sustainability, inclusiveness and the green agenda."

The ETF saw its role as bridge building and supporting the development of new qualification networks, he added.

"Although not yet a member of the European Qualification Network we target the benchmarking of our qualifications to those standards," she noted.

Barbara Rambousek, Director, Gender and Economic Inclusion at the European Bank for Reconstruction and Development, said that bank recognized the role skills training could play in building a green, digital, inclusive and sustainable economy.

She noted that bank backing for raising qualification standards - for example in Georgia's healthcare professional training - could play an essential role in supporting economic development, particularly at a time of pandemic.

"Although VET internationalization is sometimes resisted - it is seen as encouraging brain drains - development benefits from VET systems that are tuned to international standards is a hallmark of a country's move towards a sustainable economy working within the international global economy," she added.