EU enlargement and neighbouring regions: youth not in employment, education and training (NEETs)

Ongoing studies by the ETF in its partner countres on youth unemployment and transition show that the percentage of young people not in education, employment or training (NEETs) remains high. This is particularly the case in the Western Balkans and Turkey, with Albania, Bosnia and Herzegovina, Kosovo* and Turkey having 25.5, 21, 32.7 and 26 percent respectively of the youth population categorised as NEETs within the 15- 24 age group. In the Eastern Partnership region the figures are highest for Armenia and Georgia, at 28.7 and 26 percent and in the South-East Mediterranean these figures rise to over 30 percent for Jordan (38.1%), Palestine (33.4%), and Tunisia (32%). The average in the European Union is 10.1%.

Within each region differences emerge in the rate over time, the numbers and typology of the persons considered in this category. The rate is generally decreasing in the Western Balkans, except for Kosovo, and the gender difference is relatively small compared to other countries such as Jordan, Turkey, Armenia, Morocco, Palestine and Egypt. Young women are typically over-represented in this group, putting them at a higher risk of being socially and economically excluded, and so are more likely to become vulnerable in the long term.

The reasons behind young people featuring in this category are diverse. In many instances unemployment is due to discouragement, especially for young men, and a lack of decent/formal jobs. Women, on the other hand tend towards family care-taking roles particularly in the South-East Mediterranean countries. Other reasons include the disability and illness of young people preventing them from entering the labour market or what is know as 'voluntary/opportunistic' NEETs for those coming from high socioeconomic backgrounds who are able to afford it, financially at least.
Policy measures to address the issue of young people falling into this category according to country (identified by prefix) include a mix of interventions focusing on prevention, reintegration and compensation as outlined in the infographic below. 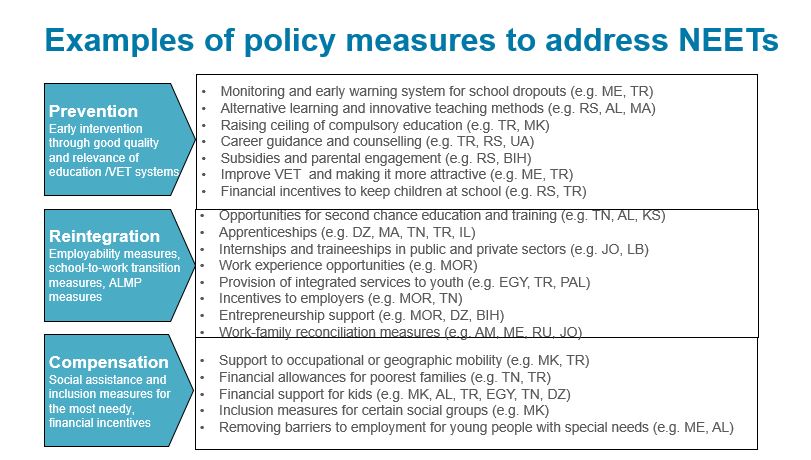 Vocational programmes can be successful in preventing early leaving from education and training. Keeping young people in education while upskilling them through vocational qualifications has proved to be a successful policy option for some countries. Reducing the incidence of early leaving is an important element in mitigating the risk of social exclusion.