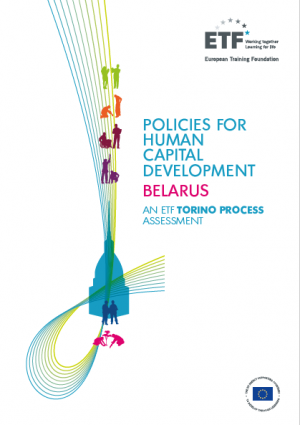 This report comes at an important time in the development of the country. There is increasing evidence that some of the factors contributing to Belarus's remarkable growth record pre 2008 are no longer present, and that the potential growth is substantially lower than had previously been observed (WB, 2018). In spite of several years of strong growth and significant strides in reducing poverty, Belarus's combined debt (domestic and foreign) has increased to the highest in the history of the country. According to World Bank (June 2019), the need for structural economic reforms is now urgent to avoid economic instability.

Given the dominant position of state-owned companies in the economy, their performance has a determining effect on the country's economic growth. While heavy government interventions in the economy have helped Belarus avoid the social costs associated with economic restructuring, these policies have distorted the allocation of labour and resources, and have severely eroded the competitiveness of Belarus.

Recently, Belarus has launched ambitious programs to increase the competitiveness of the national economy in the domestic and international markets. Particular attention is paid to innovative high-tech sectors, such as IT, bio- and nanotechnology, robotics, energy-saving technologies, etc. At the same time, further innovative development of traditional industries and state-owned companies is required.

Successful implementation of such ambitious programs depends largely on the ability on the availability of skilled human resources and their adaptability. As a result, human capital development, is at the top of the government's policy agenda.

Summary of findings on human capital

Private sector is struggling to grow

In 2018 micro and SME employment in Belarus stood at 1.49 million employees or 56.1% (2019a) of total employed population - a significant increase from 2000 when the share was 42.4%. The private sector share of employment reached a peak in 2014 (63.2% of employment) and has been declining since. Despite targeted structural reforms in recent years, while the number of micro enterprises in Belarus has been growing, the overall number of micro and SMEs declined by 4% between 2012 and 2018. The problem is that while government's measures have been effective in increasing the number of micro-enterprises, the number of medium sized is declining – and the company size is shrinking. The decrease in medium-sized enterprises and their share in employment is a similar trend to that of EU member states and Eastern Partnership region and underscores the importance of supporting SMEs in moving to higher value added activities.

One in five citizens in Belarus is retired and the number of working age population is declining. The current pension reform is insufficient in addressing the demographic decline. As the workforce ages, education and training systems must respond. With limited opportunities to replenish the labour force, education and training policies are at the forefront of improving the adaptability and employment mobility of an ageing workforce. It needs to respond to the needs of the economy and that of learners, including the elderly (aged 65+), with skills important for active citizenship and continued personal development (e.g. digitalisation of public services). In addition, longer careers due to pension reform, a more dynamic labour market and the impact of technological changes on jobs (e.g. automation) are changing skills needs of an ageing workforce at an unprecedented speed. Fostering a culture of lifelong learning with an adaptable workforce is better able to adapt to economic shock.

In 2019, the biggest labour shortages in the history of the country have hit Belarus. Skills gaps, qualitative skills mismatches, are growing in certain sectors. Despite an abundance of university graduates, in particular companies in the private sector are reporting skill shortages. The accessibility of higher education and an overall negative image of vocational education that prevails have increased the influx of graduates from higher education institutions, which has not been matched by increased availability of graduate level jobs, forcing many young people to work in roles for which they are highly overqualified (ETF, 2019). In 2017, for the first time, the number of registered unemployed with higher education surpassed that of specialised secondary education (secondary non tertiary). Widening of the disconnect between labour market skills needs and demand could threaten economic growth – in particular in a catalytic sector such as the ICT, a priority for the government.

In Belarus, many SMEs remain tied in low valued-added sectors. According to national statistical offices, the contribution of SMEs to value added in Belarus is modest compared to other countries in the region. At the same time, Belarus is the most export-oriented country in the eastern partnership region.

The problem is that although SMEs have become a major part of the economy in Belarus, this change is not reflected in skills needs analysis to identify needs and relevant education and training to boost SMEs growth by helping them move to value added activities. As a result, SMEs are often held back by skills shortages which eventually results in a loss of value added – and threaten growth prospects in particular in the knowledge intensive areas of the economy.

Belarus has until recently enjoyed a relatively even growth across regions. This is largely due to the state support to state-owned companies spread across the regions. However, the issue is that today, despite similar levels of human capital, the gross regional product at sub-national level is significantly lagging behind the capital Minsk. A recent assessment (IPM, 2018) on regional competitiveness in Belarus indicates significant differences in the level of competitiveness between Minsk and the regions. Important determinants of the gap in competitiveness between the capital and the regions are in business development and education.

Between 2012 and 2018 the number of individual entrepreneurs grew by 3.6% (from 232,851 in 2012 to 241,300 in 2018). However, at the regional level, the number of individual entrepreneurs declined in all regions – with the exception of Minsk region that benefited from the proximity of the capital. This is cause for concern because entrepreneurship is generally a strong driver of regional and eventually national economic growth. Often young SMEs are more innovative, implying that an increase in start-ups will probably lead to a more innovative business population, therefore enhancing regional competitiveness (Noteboom and Stam, 2008). The impact of industry and occupational concentration of ICT workers in the capital could hamper governments' efforts to reduce interregional differences – in particular for those entrepreneurs that rely on similar specialised occupations to move or to expand into digital and high-value added activities.

The interrelated socio-economic challenges of globalisation, demography, rapid change in the nature of the labour market, and technology-driven ICT revolution represent a challenge in providing quality education for all. The drive of the Belarusian government to diversify and modernise the economy necessitates new skills and competences – and challenges the traditional way of learning.

The structure and content of occupations is changing. New industries and traditional sectors alike are affected by innovations and technological development. Industries demand that vocational education and training prepares competitive workers with modern skills that meet the requirements of high-tech and knowledge-intensive industries. This puts the flexibility of Belarus' VET system to a test. It needs to monitor and predict future skills, develop lifelong learning, improve the quality of retraining and advanced training services. Labour market entrants with the lowest levels of educational achievement and people with low skills are at an increasing risk of unemployment and social exclusion.

The ETF assessment sets out nine recommendations for improvements in formal and non-formal schooling/training and adult education that can help address the three key human capital challenges discussed in the report: (i) skills deficiencies are tying SMEs to low value added activities, (ii) regional competitiveness is lagging despite human capital endowments, (iii) industries demand that VET responds to the new quality efficiency and equity requirements

The Ministry of Economy should take the lead in strengthening data collection for evidence-based planning, monitoring and evaluation (e.g. under the new Agency for SME Support). This could also serve as a means to establish a co-ordination mechanism for SME support organisations. The Ministry of Labour and Social Protection could develop and use big data tools which offer opportunities for real-time labour market analysis of the demand side to strengthen skills anticipation.

The new Agency for SME Support offer an opportunity to bring all SME training under one roof. The Agency could monitor the productivity and ability of SMEs to permanently adapt to changing environments and market conditions and provide tailored training programs that target managers and entrepreneurs.

SME networks and collaboration, both nationally and internationally, need targeted support to facilitate their integration into global value chains. Belarus could strategically improve access to high-quality training on internationalisation (import and export) and global value chains in priority areas for growth and competitiveness building on the mapping of economic potential conducted as the starting point in designing regional smart specialisation strategies.

Addressing regional competitiveness which is lagging despite human capital endowments

There are several policy documents that contain provisions for supporting interaction between the education system and the business sector for the purpose of entrepreneurship training. Belarus should bring entrepreneurial learning under one policy home for all levels of education and training, for example, by building on the existing Council for Entrepreneurship Development

The current efforts in student mini companies are unlikely to result in a significant number of start-ups. A much more significant potential are spin-offs, from state-owned companies or clusters such as the Hi-Tech Park where geographic proximity creates the conditions for learning. Additional analysis would be needed to identify what those sub-sectors of the economy would be in each region (e.g. smart specialisation mapping) to identify such areas of economic activity and companies at regional level and to provide targeted support in areas where the region has a competitive advantage.

Make use of resource centres to improve VET quality, efficiency and equity

Regional resource centres lay the ground for establishing Centres of Excellence in the regions instead of equipping modest and small-scale laboratories and resource centres in every vocational school. The centres could play a role in advancing vocational excellence, both by deepening and extending their relationship with employers (small-scale partnerships to strengthen the participation of small companies) and by cooperating and coordinating with other skills providers – other schools, companies, universities, research organisations, specialist development agencies and others to boost VET quality and effectiveness at regional level for a more equitable VET.

Modernisation of education and training of VET professionals incl. managers, teachers and trainers is key for responding to industries need. VET teacher education and requirements would need to be revisited where the focus on VET teacher education should be on teachers' professional competence and practical work experience and perhaps less on pedagogical aspects. Moreover, Belarus could slowly move from the separation differentiation between practical and theoretical teaching where theory teachers have a higher status and pay.

Restructuring and optimisation of VET provider networks at Oblast level

Enhance relevance of VET by optimising the VET provider network. Most of the providers are now relatively small in size and there are overlaps in provision, resource constraints etc. which could be overcome with a well thought and rational restructuring of VET school networks. This would need to be accompanied by capacity building in change management and redesigning organisational and management structures as well as funding schemes. This could also prepare a ground for establishing Centres of Excellence at regional level.