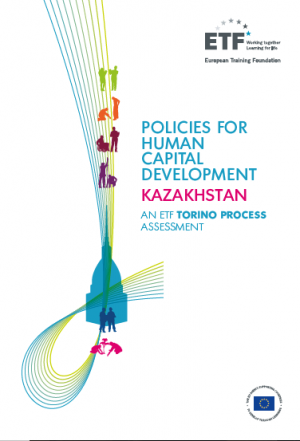 This report previously noted that human capital is an aggregate of the knowledge, skills, talents and abilities of individuals, which they can use for economic, social and personal benefit. The value of human capital depends on how well it is developed, and on the extent to which it is then available and used. Table 2 presents a selection of human capital development indicators, which provide a basic overview of how Kazakhstan is doing in this respect.

It is a commendable achievement that the country manages to maintain access to education for its sizeable youth population. Young people can expect close to 12 years of schooling on average. In that time, based on the relatively strong performance of Kazakhstan in the TIMSS and PIRLS assessments which influence that indicator, they can also count on a similar number of learning-adjusted years of schooling (11.5). Kazakhstan also scores relatively high on the Digital Readiness Index in regional and global comparisons (ranked 18th out of 118 countries); it is in the median quartile of countries in the Global Competitiveness Index (ranked 57th out of 137 countries); and its adult literacy rates are among the highest in the world.

2.2 Depletion of human capital due to gaps in migration and employment policies

Until the early 1990s, much of the literature on brain drain through migration focused on describing the phenomenon as a loss with unfavourable economic and social repercussions, and as a problem that countries need to mitigate. However, more recent research suggests that brain drain can also be a situation of gain for the home country, provided it succeeds in creating the opportunities and incentives required for circular migration (Stark, Helmenstein, & Prskawez, 1997).

The national report of Kazakhstan describes in great detail a situation of accelerating brain drain. This brain drain occurs as qualified, prime-age individuals with the skills needed in the domestic labour market leave Kazakhstan. In many cases, the country has paid a premium for the development of these skills. Economists, teachers and technicians account for the three biggest professional groups of emigrants[17] National report of Kazakhstan, 2020: B.1.3.
. Between 2014 and 2018, some 173 486 people left Kazakhstan, while only 75 436 came to the country (Figure 1).

Source: Ministry of National Economy of Kazakhstan as quoted in the national report of Kazakhstan, 2020: A.3.2.

Some of the reasons behind the exodus of qualified people can be found in labour market problems. Although they may not be obvious in the official statistics, these problems concern the quality of jobs on offer and the working conditions. Informality and self-employment are widespread, and young people constitute one of the population groups most likely to find employment in such jobs, which are also poorly paid, offer limited or no prospects for development and provide weak labour protection (OECD, 2017b).

Source: Ministry of National Economy of Kazakhstan as quoted in the national report of Kazakhstan, 2020: A.3.2.

The trends in migration lead to a depletion of human capital in rural areas and regions in which job opportunities are scarcer to start with. Such areas and regions include Karaganda (164% increase in the rate of workforce depletion over a four-year period), Kostanay (162%), North Kazakhstan (161%), Aktobe (152%) and Pavlodar (152%)[18] National report of Kazakhstan, 2020: A.3.2.
. The depletion of human capital exacerbates the economic and labour market woes of these regions even further.

One could argue that internal and external migration are a challenge, but also a fact of life in many countries. While this is also true for Kazakhstan, the phenomenon here poses a veritable risk to the national plans for human capital development in the country for two additional reasons.

The first is that the country does not seem to have yet developed any policies to promote circular migration. Circular migration is known to provide benefits for both the sending and receiving country, and for the migrants themselves, by generating and helping to distribute the financial, human and social capital generated by employment abroad (Skeldon, 2012). This implies the need to create various opportunities, including bi- and multilateral agreements and to recognise professional qualifications, including those obtained informally or non-formally. The second challenge is the absence of a mechanism for the proper acknowledgement of immigrants, the identification and recognition of their professional skills (including the recognition of informal and non-formal learning), and their proper and legal integration into the national labour market[19] See also national report of Kazakhstan, 2020: C.1.6.
. This leads to wastage of their human capital and prevents their proper mobilisation in the workforce.

2.3 Cultivation of ICT talent through VET: a priority area at risk

Kazakhstan has declared the digitalisation of its economy and society as a top development priority. The country has advanced to a stage where it is among the world's top ecosystems for digital start-up investment and development, its particular advantages being affordable IT talent and a start-up-friendly investment environment, especially in the capital Nur-Sultan (Startup Genome, 2019).

Both the national report and the digitalisation strategy acknowledge that Kazakhstan is only at the beginning of its digitalisation trajectory and that much remains to be done if the good practices and innovation capacity seen in the dedicated hubs in Nur-Sultan and elsewhere are to become a driving force for the national economy. The development of human capital is thereby one of the priority areas in this respect, next to the transformation of traditional sectors in the economy, the stimulation of digital entrepreneurship, the digitalisation of the government and the expansion of the IT infrastructure[20] See Government Decision No. 827 of 12 December 2017 establishing the Digital Kazakhstan state programme (Section 3); see also national report of Kazakhstan, 2020: A.3.1.
.

To a large extent, the human capital development strand of the digitalisation strategy involves cultivating a new generation of ICT specialists, specifically in areas that are in the domain of vocational training, such as information systems and information security system designers, database management system developers and software developers. In recognition of the significance of human capital development through VET in this respect, the authorities have increased the state educational order for ICT with the aim of supplying the labour market with at least 25 000 ICT specialists annually, starting in 2020 (Karatayeva, 2017).

To prepare the education and training sector for this responsibility, the digitalisation plans call for a revision of content and priorities in secondary general education and VET[21] Ibid.
by adding new subjects to the curricula, developing new professional standards and, as already mentioned, allocating a sizeable share of the state order to promote participation in the new ICT-related courses.

However, at the time of preparing this assessment, the national report suggests that the VET system is not yet fully ready for these tasks due to systemic shortcomings that may risk the slowing down or even failure of the digitalisation plans. One such risk is the acute shortage of teaching staff with enough knowledge of foreign languages (English) and ICT. In fact, the national report refers to a critical mass of teachers who don't even have a basic level of education in these two fields[22] National report of Kazakhstan, 2020: D.3.6.
. A possible reason for this situation is that the digitalisation plans neglect the need to upgrade the content and focus of initial and continuing teacher training, especially for teachers and trainers in VET.

Another risk is the gap that exists between the education and training system and the ICT sector as a potential employer of graduate talent. There are problems in relation to communication and ICT employer participation in VET. This prevents the VET system from adjusting adequately and in a timely manner to the new, ICT-related demand in the economy and to the expectations associated with the digitalisation strategy[23] See Section 3.4 of the digitalisation strategy, for example.
. Some observers suggest that the lack of high-quality specialists in this field is at least partly a consequence of the lack of involvement of the ICT sector in the process of preparing the specialists it needs (Karatayeva, 2017).

2.4 Shortage of VET specialists as an impediment to human capital development

For some years now, national authorities, stakeholders and the donor community in Kazakhstan have been prioritising teacher-related policies as an area of significance for better and more equitable education (OECD, 2014). Such policies have also recently been prioritised as a key area for human capital development through VET[24] See Presidential Decision No. 636 of 15 February 2018: Strategic Plan for the Development of the Republic of Kazakhstan until 2025; see also national report of Kazakhstan, 2020: D.
. Despite remarkable progress in improving employment conditions, professional development opportunities and remuneration for teachers, challenges in this area still remain. These challenges relate particularly to teachers and trainers in VET, who have been largely excluded from some of these improvements.

Unlike teachers in general education, teachers in VET do not receive financial incentives to engage in professional development and the conditions of their employment have remained largely unchanged[25] National report of Kazakhstan, 2020: D.2.1 and D.2.3.
. Furthermore, the salary scheme for trainers and masters in work-related disciplines still does not take into consideration their professional category and prior work experience.

These shortcomings lead to several problems. The most significant of these appears to be the shortage of teachers and trainers – especially in specialised subjects, which also happen to be the ones providing qualifications in high demand in the labour market (Figure 3).

Figure 3. Shortage of teachers and trainers in VET (2018)

Source: Ministry of National Economy of Kazakhstan as quoted in the national report of Kazakhstan, 2020: D.2.1.

According to the national report, engineering specialties are particularly affected by the shortages[26] National report of Kazakhstan, 2020: D.2.3.
. Part of the challenge is also that young teachers do not receive sufficient induction support. Most VET providers operate an initiative called 'Young teacher's school' (Школа молодого педагога), but the quality and intensity of support offered to young teachers within the framework of this initiative varies greatly between schools as there is no unified approach, guidance or standard[27] National report of Kazakhstan, 2020: D.1.3.
.