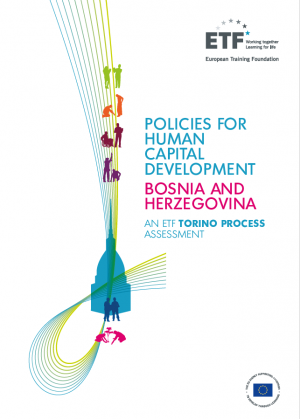 POLICIES FOR HUMAN CAPITAL DEVELOPMENT IN BOSNIA AND HERZEGOVINA

This ETF assessment comes at an important point as Bosnia and Herzegovina prepares for the next multiannual cycle of reform implementation, which includes preparation for EU support through the next generation of the Instrument for Pre-accession Assistance (IPA) in the period 2021–2027. The report is expected to help prioritise reforms and devise actions by providing input to policy makers in the area of education and training. The assessment findings complement the monitoring of the Economic Reform Programme from a sector point of view.

Like other ETF assessments, this paper is not meant to be exhaustive. It focuses on challenges, which the ETF recommends addressing as a matter of priority.

Bosnia and Herzegovina declared sovereignty in October 1991. The country is bordered by Croatia to the north and west, Serbia to the east, and Montenegro to the south. The official languages are Bosnian, Croatian and Serbian.

The presidency is tri-partite, with one Bosnian, one Croatian and one Serbian member. The Parliamentary Assembly is the legislative body. It comprises the House of Representatives and the House of Peoples, with members elected by proportional representation along ethnic lines from the Federation of Bosnia and Herzegovina and the Republika Srpska.

The Federation of Bosnia and Herzegovina has its own two-chamber parliament and each of the 10 cantons has its own government, prime minister and assembly. Each canton also has autonomy over issues such as industrial relations, employment and education. The Republika Srpska has its own two-chamber parliament and government, and municipalities with their own legislative powers. Additionally, the Brčko District has an assembly and government, although the laws of Bosnia and Herzegovina apply there. There are ministries at state, entity and cantonal level (ETF, 2017).

The overall impact of the constitutional structure is a strong emphasis on local autonomy for local policy actions and, conversely, longer times for developing and implementing consistent state-wide public policy initiatives. Local autonomy puts more demands on cooperation structures and mindsets in order to develop state-wide solutions. This is particularly true for the areas of education, training and employment.

Bosnia and Herzegovina submitted its application for EU membership on 15 February 2016 and in 2018 it applied for EU candidate status. In June 2019, the EU General Affairs Council reiterated the concerns raised by the European Commission on Bosnia and Herzegovina's EU candidacy application and held off on taking a decision until a later date, stressing political stalemate and poor coordination across the various entities which was hampering progress in economic reform.

Bosnia and Herzegovina is a small, upper-middle-income economy with a population estimated at some 3.8 million citizens. The population has been declining in recent years. The negative demographic change is due to accelerated ageing and emigration, leaving only 15% of the population aged between 15 and 24 years (World Bank, 2019).

Although the economy of Bosnia and Herzegovina has been expanding steadily in the past few years, job creation has not kept up, resulting in one of the most challenging labour market situations in the Western Balkans. In 2018, jobs were generated primarily in industry and services, but fell in agriculture. Despite an increase in both the activity rate and the employment rate of women, both rates were low compared to most other countries in the region, and the country maintained substantial gender gaps in employment.

The labour force participation rate in Bosnia and Herzegovina is very low – 20 percentage points lower than the EU average – and stagnating, showing the lack of capacity for supporting effective transition to the labour market.

At just over 19% in 2018, unemployment continues to be a critical factor for Bosnia and Herzegovina despite a gradual downward trend in recent years. The downward trend can be attributed to declining labour force participation as people emigrate or stop looking for work. The female unemployment rate (21.5%) continues to outpace the male unemployment rate (19.2%). Enrolment in early childhood education and care is low, as is the availability of elderly care. Together, these factors contribute to the low employment levels of women, who predominantly assume the role of caretaking.

Youth unemployment fell by 7 percentage points to 38.8% compared to 2017. This could be due in part to continued emigration. Almost one in four young people could be classified as NEET (World Bank, 2019). Long-term unemployment (those out of work for 12 months or more) rose to 81% between 2017 and 2018 (Agency for Statistics of Bosnia and Herzegovina, 2018e). Informal employment is estimated at 30% in Bosnia and Herzegovina. The high tax wedge, including on low salaries, works to a certain extent as a disincentive to work and/or hire for formal employment. For employees, working in the informal economy means being stuck in a low-paid and risky activity. The lack of training taking place in informal employment prohibits those employees from claiming better-paid positions in the formal sector.

In 2014, the Compact for Growth initiated by the EU laid the groundwork for a stronger focus on reforms that promoted economic and social development. The Stabilisation and Association Agreement entered into force in June 2015 and the Reform Agenda was adopted. This signalled a greater commitment to reforms regarding a business enabling environment, public financial management, the labour market, social protection, the rule of law and public administration.

The Reform Agenda prioritises human capital development as a means of improving the activity rate of the working age population and reducing the high unemployment rate.

Since 2015, Bosnia and Herzegovina has been submitting a medium-term Economic Reform Programme (ERP) to the Commission on an annual basis. In this programme, it sets out plans to strengthen macro-fiscal stability and tackle structural obstacles to growth. Medium-term public budget planning is affected by fragmented responsibilities and limited cooperation between the entities. Most of the measures presented by Bosnia and Herzegovina in the ERP are not state-wide measures and only include entity-specific activities (European Commission, 2019).

The complexity of education governance in Bosnia and Herzegovina means that there are more than 70 policy documents in terms of strategies, framework laws, laws and rulebooks, for example.

There is no state-wide employment strategy in place. The Republika Srpska entity has an employment strategy for 2016–2020, with a 2018 action plan. Although the Federation of Bosnia and Herzegovina has no employment strategy, several employment programmes are currently in operation. Similarly, there has been no comprehensive state-wide strategy for vocational education and entrepreneurial learning since 2015. The implementation of the Strategic Platform for the Development of Adult Education, which expires in 2020, suffers from the absence of a state-wide qualifications system.

Comprehensive reforms have been undertaken in education. Recent reforms addressed mostly labour market needs through the development of a qualifications framework for all levels of education in Bosnia and Herzegovina.

The Bosnia and Herzegovina Torino Process report, drafted by a local expert contracted by the ETF, describes the many education and training initiatives, policies and strategies at entity, canton and even municipal level. The report emphasises that skills development is a priority in Bosnia and Herzegovina and that many actions are under way. The strategies are supported by specific actions aimed primarily at creating closer links between business and education, improving teacher training and promoting work-based learning and internships.

Four framework laws covering pre-school, primary and secondary education, secondary vocational education and training and higher education are in place at state level. The purpose of framework laws is to provide principles and standards and to harmonise and coordinate legislation and policies adopted by education authorities within Bosnia and Herzegovina and with EU standards and principles. Legislation still needs to be harmonised between state, entity and canton level.

The EU is the country's largest single donor[4] Between 2007 and 2018, Bosnia and Herzegovina received EUR 1.5 billion from the EU, of which an estimated EUR 433 million came from regional programmes. Since 2000, the European Investment Bank has awarded EUR 2.4 billion in loans to support projects in Bosnia and Herzegovina (European Commission, 2019).
, making significant contributions to education and training reform and labour market improvements. In the period between 2018 and 2020, the approach reflects a stronger labour market orientation and greater support for employability. The specific objectives are to:

increase employability by linking the education system(s) with labour market needs, with a special focus on further development and implementation of the qualifications framework;

improve quality and effectiveness of labour market institutions and services;

increase female employment and the labour market participation of women.

In 2018, supported by the ETF, all parts of the education system worked together to establish a set of state-wide priorities for entrepreneurship and digital competences in recognition of the increasing importance at EU level of key competences for a more flexible labour market.

The adoption of state-wide strategies, for public financial management and employment for example, remains a key requirement for Bosnia and Herzegovina to benefit fully from the IPA funding.