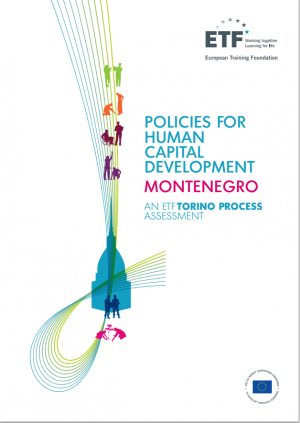 This European Training Foundation (ETF) assessment was prepared in 2019 with the help of a standardised template for national reporting (National Reporting Framework – NRF). Thanks to the strong leadership and commitment of the Montenegrin Ministry of Education (MoE), this NRF was filled in by a multi-partner national working group set up for the Torino Process purpose under the chairmanship of Zora Bogicevic, Torino Process national coordinator. The result was the national Torino Process report for Montenegro (2019), which has been used as a basis for this assessment, together with additional information sources, where relevant.

Identification of the key issues presented in this assessment was jointly done by the ETF and the Montenegrin Torino Process working group. The main findings and recommendations were also shared and discussed with national stakeholders.

This ETF assessment comes at an important point as the country prepares for the next multiannual cycle of reform implementation along the lines of these priorities, which includes preparation for European Union (EU) support through the next generation of the Instrument for Pre-Accession Assistance (IPA) in 2021–27. The report is expected to help with the prioritisation of reforms and the design of actions by providing input to policymakers in the domain of education and training. The assessment findings complement the monitoring of the Economic Reform Programme (ERP) from a sector point of view.

Like other ETF assessments, this paper is not meant to be exhaustive. The national report of Montenegro covers a broad selection of problems around human capital development (HCD) and use, while the focus here is on challenges which the ETF recommends addressing as a matter of priority.

With 13 812 square kilometres and 622 359 inhabitants (2018, see Table 1), Montenegro is one of the smallest countries in the world; according to official estimates from the Statistical Office of Montenegro (Monstat), it ranks 39th in Europe (156th worldwide) by area size and 43rd out of 51 (163rd worldwide) by population size. Economy-wise, Montenegro is classified by the World Bank as an upper middle-income country.

Montenegro is an open and service-oriented economy. The Gross Domestic Product (GDP)/capita places the country among the poorest in Europe (36th out of 43 in Europe, with an estimate of USD 7 397 in 2018 (ERP Montenegro 2019-2021)), at a comparable level to other Western Balkan countries. However, the GDP growth is remarkable and was until recently the 6th highest (out of 43), with 4.3% annual growth in 2017 (5.1% in 2018 (World Bank, 2019). Roughly, and in a quite stable manner over time, the service sector accounts for 60% of GDP (59.1% in 2017), while around one-sixth (15.9% in 2017) is generated by (energy-intensive) industry and only 6.8% by the agriculture sector – the rest being the informal sector. The remarkable GDP growth is, however, considered unstable due to a vulnerability to external shocks, as its economy relies heavily on capital inflows from abroad to stimulate its growth. Accounting for 8.9% of GDP, foreign direct investments in Montenegro are higher than in other South East European countries and high compared to EU countries as well.

International indicators convey that Montenegro and Turkey have the highest global innovation index in the region.

In terms of social situation, including equity, one should note that, beyond suffering a strong decrease in 2018, the GDP/capita hides a number of disparities, in particular linked to sex and geographical location. The Monstat Poverty Analysis revealed that 8.6% of the population lives below the absolute poverty line (2013 est, Monstat, 2014). This rate reaches 10.3% in the northern regions. According to the Social Scoreboard[1] The Social Scoreboard includes 14 headline indicators, of which 12 are currently used to compare performance of Member States. These 12 are also compared for the Western Balkans and Turkey. The assessment includes the country's performance in relation to the EU average (performing worse/better/around EU average) and trends within the country (improving/deteriorating/no change). Data availability is from 2015 to 2017.
supporting the European Pillar of Social Rights, it appears that Montenegro has a high share of people at risk of poverty or social exclusion. This is particularly high for vulnerable families, the unemployed and children. While safety nets exist, the social protection system is not well equipped to target and assist those in need.

At the European level, Montenegro shows strong commitment to EU accession: since December 2010, when it acquired candidate country status, and June 2012 when accession negotiations started, it has demonstrated progress in the European Accession process, as acknowledged by the European Commission's assessment of the ERP carried out in April 2018. Montenegro's strategic development objective stated in the ERP is 'sustainable and inclusive economic growth that will contribute to reducing the country's development gap relative to the EU average and increasing the quality of life of all its citizens'. This policy is led by a governmental team that has been in place since November 2016.

At national level, two sets of policies are planned to improve the situation in the medium term:

Subsequently, the priority reform measures validated by the government in 2017 focus on public finance management; energy market and transportation market reform; improvement of business environments; development of research and innovation and the digital economy; and improvement of trade, education and skills as well as the employment and labour market.

Human capital development is expected to play a key role in the national policy framework. Among the 32 chapters under negotiation for accession to the EU, chapters 25 and 26 on education and research have been provisionally closed (yet subcommittee meetings still take place annually). In the area of VET, the country seeks to respond to the Riga mid-term deliverables 2020 and in higher education (HE) to the Bologna Process. However, HCD challenges remain manifold in Montenegro, including a worrying degree of skills mismatch between labour market needs and the training supply offered by the education and training system; low level of educational attainment and challenging quality of education; centralised governance; and funding impetus of the education and training sector that makes responsiveness to new HCD needs a challenge. Skills development needs to be better tailored to the structure of employment, which follows nearly the same pattern as the GDP structure: in 2018, almost three-quarters of the country's workforce were employed in services (72.7%), 18.9% in industry, while the agriculture sector employed 7.8% of the workforce (ETF, 2018c).

As part of this vision, as per the Montenegro National Report (2019), the government aims to 'deliver excellent and inclusive education and training that offers opportunities for both economic and social integration and which fosters democratic citizenship and values – thus helping all individuals to develop their full potential. They should be built on:

skills and competences which ensure employability, adaptability and the personal development of individual;

provision which is accessible, valued, modern and attractive to all;

integrated, responsive and diversified systems with governance and funding which foster excellence, inclusion and effectiveness.

To do so, the Vocational Education Development Strategy (2015–20) and its action plan, adopted in December 2016, provide the strategic and operational umbrella expected to take up part of these challenges. Other additional strategic frameworks adopted since the last Torino Process round include the Strategy of Teachers Training in Montenegro 2017–24, the Adult Learning Strategy, the Inclusive Education Strategy, and the Strategy for Small and Medium Enterprise Development.

Design of the post-2020 VET strategy started in mid 2019 to pursue and intensify the efforts.