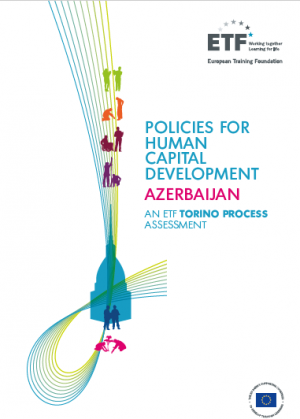 The focus is on challenges that prevent the development and use of human capital in the country and can be addressed through education and training, including VET. For the purpose of this assessment, human capital is defined as the aggregate of the knowledge, skills, talents and abilities possessed and used by individuals for economic, social and personal benefit.

Azerbaijan's priorities in human capital development feature across different strategic roadmaps adopted in December 2016, including the Strategic Roadmap for VET 2016–2025. The country is also implementing the European Union (EU) support programme: Annual Action Programme (AAP) 2014 on Education and Training. Preparations for the new EU AAP 2018 on Education for Employment are in the pipeline, including preparations for the next Eastern Partnership (EaP) multiannual programme.

This assessment is therefore meant as an input to the above-mentioned programmes. This report is a conclusion of the stakeholders' workshop convened in Baku on 28–29 November 2019, to discuss an early draft of the ETF assessment. Participants found the ETF findings relevant and further elaborated the recommendations. The ideas they contributed are reflected in this final report.

The EU's relationship with Azerbaijan is based on the EU–Azerbaijan Partnership and Cooperation Agreement, which has been in force since 1999. The EU's cooperation with Azerbaijan aims at supporting the country's reform agenda, in particular in the domains of economic diversification, sustainable growth and social development, good governance and rule of law, and its connection with the EU through enhanced connectivity, mobility and people-to-people contacts. One of the priorities for EU assistance to Azerbaijan is supporting skills development with a particular focus on VET, aiming to help the country to have a better match between the skills of the labour force and the needs of employers.

The country has rich natural resources, particularly oil and gas. However, the government acknowledges the importance of human capital development as a necessary prerequisite for reduction of the country's dependence on oil and gas revenues, and strengthening its resilience to external shocks.

The primary goal of the government is to speed up economic diversification, maintain rapid growth in the non-oil sector regardless of the level of oil and gas revenues, increase competitiveness and expand expert opportunities.

This assessment finds multiple systemic challenges concerning the development and use of human capital in Azerbaijan, which may jeopardise further progress and the sustainability of reform achievements to date.

Three key issues have been identified in relation to the challenges relating to human capital development.

Skills mismatch is becoming a growing concern where businesses report an inadequately educated workforce as an obstacle to their business performance. On the Global Competitiveness Index, the country ranks 58th out of 141 countries, with particularly poor performance in 'digital skills for active population' and 'ease of finding skilled employees'.

The qualifications mismatch affects over 44% of employed young people (aged 15 to 29), according to a 2016 study by the State Statistical Committee (SSC), and 37% were employed in jobs not matching their qualifications. Yet good-quality retraining and upskilling opportunities, as well as internships to acquire practical experience, are relatively scarce.

Participation in secondary VET is one of the lowest in the EaP region with 14.5% in 2018, compared to around 30% in Ukraine and 40% in Moldova and Belarus. The scope of VET provision is limited due to a lack of infrastructure and adequate training staff as well as a low interest in VET, as seen in the low enrolment numbers. There is a lack of functional and institutionalised platforms for cooperation. Furthermore, there are no financial instruments in place to give incentives to employers to strengthen their involvement in VET.

According to the World Bank's Human Capital Index released in 2019, Azerbaijan ranks 69th out of 157 countries.

The country has a young population. In 2018, 20.7% of the total population were aged 0 to 14 years. The high proportion of young people in the population's overall structure is reflected in an increase in the share of young people in the working-age population, and this trend will continue for some years. In the period 2017 to 2025, 125 200 people will be entering the labour market every year, which is almost 2.5 times higher than the number of jobs created annually.

The negative features of the country's labour market include relatively high youth unemployment of the total unemployed population (12.7%), vulnerable employment (55.2%), a high percentage of self-employed people (68.3%), especially in agriculture and construction, and higher growth in wages than in labour productivity (ETF, 2019a).

Although the youth unemployment rate has been steadily decreasing over recent years, it is still higher than the overall unemployment rate and stood at 12.7% in 2018. Youth unemployment is higher among females than males (14.7% and 11.0%, respectively, in 2018), and young women are more likely than men to be affected by vulnerable and marginal work. The percentage of those people not in education, employment or training is also high, reaching 23.0% in 2017.

A shortage of career guidance and professional orientation services leads to long periods of job search. The new Youth Employment Programme has the potential to address these issues.

Public expenditure on education remained at 2.5% of gross domestic product in 2018. Overall, this figure is lower than the average of 4.5% in Eastern European countries and the average for higher middle-income countries. However, there is an almost 13% increase in the 2019 budget allocations for education, which confirms the government's commitment to continue to improve the country's human capital. In general, VET expenditure as a share of total education expenditure is very low and has decreased during the past five years, from 2.1% to 1.4%.

Participation of adults in education and training is limited, and there are a number of obstacles. Occupational standards are generally seen as the new starting point for developing state educational standards, but there is currently no system-wide use of them.

Azerbaijan has moderate levels of educational attainment among its adult population. In 2018 the majority of adults (aged 25–64) had a medium level of education (76.4%), 16.6% had completed higher education, and 7.1% had primary education or lower.

At present, there are limited opportunities for adult learning, skills and career development in Azerbaijan. Problems include the lack of adequate adult training facilities and offers, especially outside bigger urban centres.

The ETF assessment provides concrete recommendations concerning improvement of the strategic framework for the development of human capital with emphasis on the three identified key issues.

The ETF recommends reviewing the VET financing system by diversifying its resources, developing a costing approach and improving the distribution of funds, their management and monitoring.

This will include establishment of the Vocational Education Development Fund, which will manage and allocate the funds among VET institutions in a transparent manner. The planning should take into account the various sources of funds, which are both public and private (including private VET providers' and donors' contributions), in order to bridge the current gap between strategies and actual achievements, ensure more visibility and transparency, and make the policy more credible.

The ETF recommends a comprehensive and coherent approach to address this issue by fostering the conditions conducive to a multi-level and multi-stakeholder governance ecosystem that steers skills development to answer efficiently the real socio-economic needs and foster attractiveness for young people and enterprises.

The national authorities need to create incentives and dedicated policy mechanisms for the involvement of employers in the VET policy cycle. This should range from policy planning to implementation and monitoring, including development of VET standards and curricula in accordance with the real needs of the labour market as well as active participation in the governance of the VET system.

The ETF recommends improving and streamlining the professional standards for VET teachers and masters[1] The teaching and training in VET institutions are conducted by Teachers and Masters. There are three categories of masters - chief master, head master and master masters in VET system.
and introducing career and professional development schemes for VET personnel. Azerbaijan could consider allowing practitioners from the world of work to enter teaching even without formal teaching qualifications. Furthermore, it is recommended to carry out activities to enhance the prestige of the teaching profession, including creation of a promotion and career development system. Sharing expertise and best practice among teaching personnel and companies needs to be stimulated more.

It is recommended to make regular use of analytical tools such as tracer studies with graduates and employer surveys that would provide data for more robust planning and show if the training is relevant to the labour market.

The shift to more targeted policy-making will require capacity building with regards to data collection and analysis.

Prevent the waste of human capital due to youth unemployment

The ETF recommends more coherence and adjusting the youth employment policies so that they include services and training offers that are more user-friendly and appealing to young people, thus making the focus on youth an integral part of the mainstream labour market policy of the country.

In particular, the ETF recommends improving youth support measures by tailoring them to the specific needs of different groups, in particular disadvantaged young people. Furthermore, it is recommended to invest in the professional development of staff from the state employment service, to prepare them for the complex task of target group outreach and diverse needs and expectations.

The ETF recommends strengthening the quality and effectiveness of early career guidance and counselling services at general and VET institutions, including building career education into the curriculum, linking it to students' overall development, and offering guidance in career planning throughout secondary schools. Employers and non-government organisations (in addition to the State Agency for Vocational Education and the Labour Market Observatory) should be involved in the development of trades and the promotion of VET and career guidance.

The ETF recommends prioritising the expansion of adult education opportunities, in a lifelong learning perspective, and the collection of evidence on participation in order to improve employability, close the mismatch gaps and ensure more equity. This improvement should cover the content and methods of training as well as their relevance to the labour market needs.

This could include reinforced involvement of public providers in adult education, and better coordination of the involvement of private providers. Developing interactive and participatory methods will be relevant in gaining interest, especially of young people, in learning and development of skills.